Kazuki Nakajima and Yuhi Sekiguchi fended off a mid-race attack from their Lexus stablemates to win the Suzuka round of SUPER GT series for TOM’S. 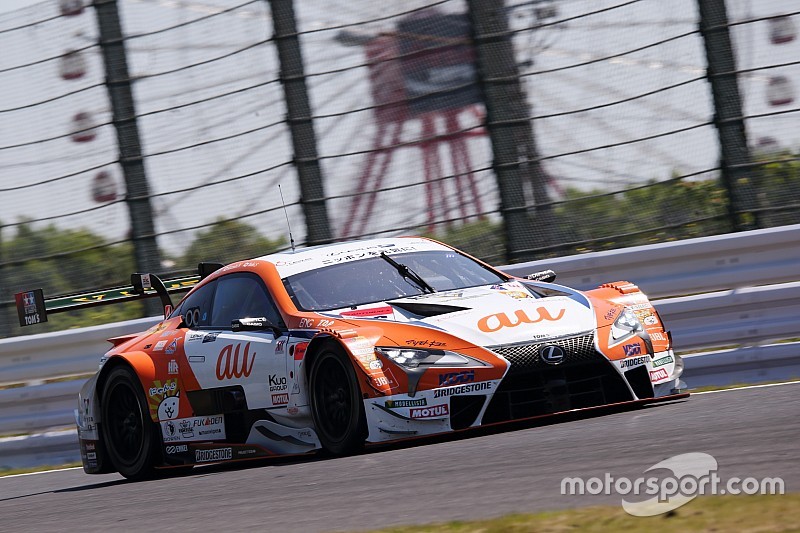 Nakajima started the race from pole position in the #36 TOM’S Lexus LC500, sprinting away from the field to build a one second gap within the opening lap itself.

Nakajima slowly but steadily extended his advantage to 2.5s, as the order in the top 10 largely remained the same.

However, the race came alive on lap 18 when erstwhile championship leader Ronnie Quintarelli crashed heavily at the 130R with what appeared to be a technical failure on his NISMO-entered GT-R.

With the car wedged into the barriers, a safety car had to be called in, which stayed out for four laps.

As soon as the SC period ended on lap 22, nearly half the field dived into the pits, with the remaining cars following in on the next two laps.

After Nick Cassidy (#37 TOM’S Lexus) dropped down to third in the pitstop cycle, the Kiwi initiated a stunning chargeback, quickly closing on the back of the race-leading #36 TOM’S Lexus - now driven by Yuhi Sekiguchi - and the LeMans Lexus of Kazuya Oshima.

Cassidy barged past Oshima at the final chicane and started chasing the sister TOM’S car for the lead, only to undo his hardwork by running wide at 130R.

With Cassidy dropping back to third, Oshima started pilling pressure on Sekiguchi for the lead, only for the 31-year-old to rebuff all his overtaking attempts.

Over a period of time, Sekiguchi started pulling away from Oshima, eventually taking the victory by a comfortable margin of over eight seconds.

Oshima eventually fell behind Cassidy with four laps to go, the Kiwi taking advantage of traffic to make a pass in the opening sequence of corners.

Oshima and teammate Kenta Yamashita had to settle for third, although the result did mark the end of a podium-less streak for the duo dating back to last year’s Thailand round.

ARTA pair Tomoki Nojiri and Takuya Izawa finished fourth as the leading Honda, ahead of the Sard Lexus of Heikki Kovalainen and Yuichi Nakayama.

Fuji winners Yuji Tachikawa and Hiroaki Ishiura made it five Lexus cars in the top six, the Cerumo duo completing an emphatic charge from 14th on the grid.

The resultant contact forced a front-left puncture on Button’s Kunimitsu Honda, forcing the Englishman to make an unscheduled pitstop.

Nissan endured a difficult race, with the NISMO entry crashing out and the Impul GT-R slowing down on the final lap, before coming to a  complete halt moments after crossing the finishing line.

Impul’s James Rossiter and Sasaki finished a lap down in 10th, two places behind the lead Nissan of Jann Mardenborough and Mitsunori Takaboshi, which was hit with a penalty for violating race start procedure.

Lexus doubles up in GT300

Morio Nitta and Sena Sakaguchi took the GT300 honours in the #96 RC F GT3, ensuring a double victory for Lexus at Suzuka.

The duo successfully passed the pole-sitting #25 Tsuchiya Engineering Toyota 86 MC, which dropped to fifth after Takamitsu Mitsui ran wide at the chicane on the very final lap of the race.

The #5 Toyota Mach 86 MC of Natsu Sakaguchi and Tetsuju Tamanaka took second, while the podium slots were completed by the #61 Subaru BRZ of Takuto Iguchi and Hideki Yamauchi.