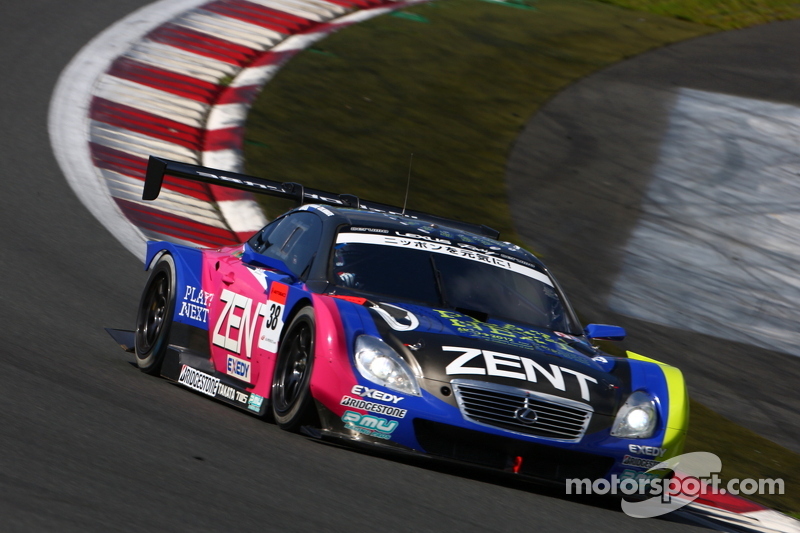 Race 2 of the JAF Grand Prix SUPER GT & Formula NIPPON “FUJI SPRINT CUP 2012”, an event bringing together Japan’s premier production car race, the SUPER GT, and Japan’s premier formula car race, Formula Japan, took place on November 18 at Fuji Speedway (one lap 4.563 km) in Shizuoka Pref. A large crowd of 41,300 spectators turned out to watch the hot racing and cheer on their favorites on this final day of the event’s three days of competition.

Unlike the regular season SUPER GT series races competed by a relay of two drivers for each machine, this event was competed in two races on the 17th and 18th driven by one driver each. The final team standings for the event were determined by the point totals of each team’s two drivers in these two races, and the JAF Grand Prix title was given to the overall winners in each class.

Race 2 of the GT500 class (22 laps /100.386 km) started at 15:30. It was 4th-place qualifier Yuji Tachikawa in the ZENT CERUMO SC430 who pulled off an amazing dash away at the start. Following behind him came the pole-sitting PETRONAS TOM’S SC430 driven by Kazuki Nakajima. From there the race developed into a one-on-one duel between these two cars. Nakajima is the son of the former F1 driver Satoru Nakajima and has become a leading contender to become a new Toyota GT500 ace driver since returning to racing in Japan last year after competing in F1 himself. As for Tachikawa, he is the long-standing Toyota ace who holds the record for most GT500 class pole positions and most wins at Fuji Speedway.

In the early stages of the race Nakajima passed Tachikawa and through the middle stages of the race it was Tachikawa chasing the leader Nakajima. To the delight and excitement of the big crowd of over 41,300 spectators, it was an intense battle for the lead that at times saw the two cars racing side-by-side for as much as one-third of a lap. On the last turn of the third to the last lap, Tachikawa re-passed Nakajima and then ran on to the win.

Added to yesterday’s result, this win gave the ZENT CERUMO SC430 team (Yuji Tachikawa/Kouhei Hirate) the JAF Grand Prix, as well as the Minister of Transport Prize for the overall winner in the GT500 class.

In the GT300 class Race (22 laps /100.386 km) the winner was triple a vantage GT3 driven by Hiroki Yoshimoto, who managed to stave off a fierce chase by Hiroki Katoh in the EVANGELION RT TEST TYPE-01 Apple Shiden. The GT300 class JAF Grand Prix went to the HANKOOK PORESCHE team (Masami Kageyama/Tomonobu Fujii) that won Saturday’s Race 1.

Yuji Tachikawa: “Since the FUJI SPRINT CUP isn’t a regular series race, I intended to go out and enjoy the racing, and that is exactly what happened. I think the spectators enjoyed it too. But, （No. 36 PETRONAS TOM'S SC430 team’s） Kazuki [Nakajima] is truly a tough competitor. It was a tough but fair battle so I really enjoyed it. I got a great start and was able to get out in front, and after being passed I was able to hang on without giving up and eventually pass him back. I have to say, it was really fun.”

Hiroki Yoshimoto: “Thank you! I am tremendously happy. In the past I have had many disappointing experiences in the JAF Grand Prix but this win has remedied all that now. It happens that the team will suspend race activities as of the end of this season, and that was also on my mind as I raced today. I got a bit behind at the start but I was finally able to get into the lead. After that however, Katoh-san (No. 2 EVANGELION RT TEST TYPE-01 Apple Shiden) was very fast too and it was a tough fight from there on, so I’m happy to have won in the end.”