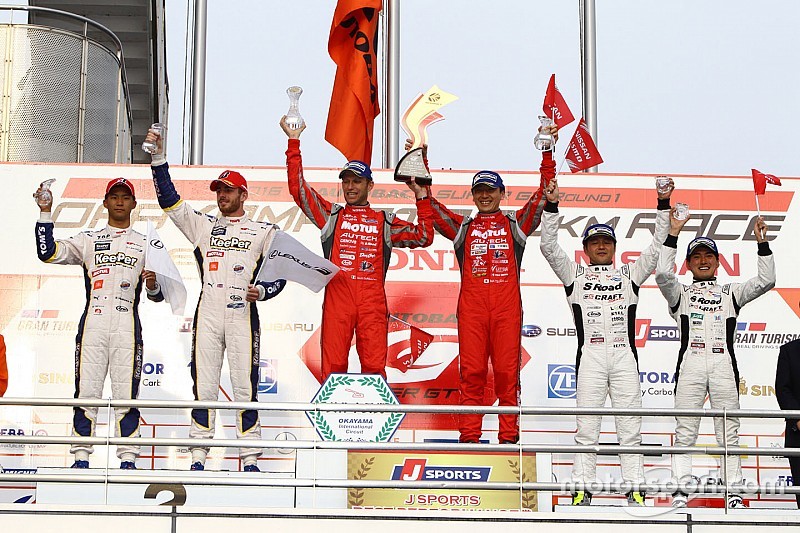 For the Super GT season's opening round, soft sunlight shone down through a thin overcast of cloud over Okayama International Circuit.

The Okayama GT 300km RACE, Round 1 of the 2016 Autobacs Super GT series, took place at the Okayama International Circuit (Okayama Pref.) on April 10th. In the GT500 race, the No. 1 Motul Autech GT-R (Tsugio Matsuda / Ronnie Quintarelli) showed their champion prowess in coming from a 3rd position grid start to take a well-earned victory. In the GT300 class, the No. 65 Leon Cvstos AMG-GT (Hiroki Kurosawa / Naoya Gamou) gave the team its first SUPER GT victory.

For the Super GT season's opening round, soft sunlight shone down through a thin overcast of cloud over Okayama International Circuit. At 14:40, the 42 cars of the GT500 and GT300 classes pulled slowly away from their respective starting grids. After being led by two motorcycles of the Okayama Prefectural Police slowly through one parade lap, the cars then entered the formation lap, and finally, with the pole-starting No. 37 KeePer Tom's RC F (James Rossiter) in the lead, the 82-lap race got underway.

The No. 37 KeePer Tom's RC F successfully cleared the first turn of the race in the lead, followed by the No. 6 Wako's 4CR RC F (Andrea Caldarelli) and the No. 1 Motul Autech GT-R (Ronnie Quintarelli). In an attempt to stage a repeat of the team's win here last year at Okayama, Rossiter set a fast pace through the opening lap in hopes of opening up a margin of lead. On the second lap, his margin grew to 1.6 seconds and on lap three to 2.2 sec.

Meanwhile, behind the leaders, in the group including the No. 12 Calsonic Impul GT-R (Hironobu Yasuda), No. 39 Denso Kobelco Sard RC F (Kohei Hirate) and the No. 38 Zent Cerumo RC F battle for 5th position the No. 19 WedsSport Advan RC F (Yuhi Sekiguchi) was thrilling the crowd with his bold overtakes. Having started from eighth position on the grid, Sekiguchi managed to move up to 6th position by the 11th lap.

In the early going, the battle for the lead among the top three was in a stale-mate, but after the 21st lap the No. 1 Motul Autech GT-R running in 3rd position began to close the gap on the No. 6 Wako's 4CR RC F in 2nd place. By the 22nd lap the gap was down to 0.4 sec. and soon the two cars were running nose to tail. This battle between the two Italian drivers continued until the hairpin of the 28th lap, where Quintarelli finally passed Caldarelli. This put the No. 1 Motul Autech GT-R in 2nd position.

With that momentum, No. 1 Motul Autech GT-R charged on until the 34th lap, gradually closing the gap to the leading No. 37 KeePer Tom's RC F. From there, just when it looked as if a battle for the lead was about to begin, the No. 37 KeePer Tom's RC F pulled in for its routine pit stop on the 35th lap while still holding the lead. In the driver change, Ryo Hirakawa took over from Rossiter for the second half of the race.

Meanwhile, with the No. 37 KeePer Tom's RC F now in the pit, Quintarelli ran on hard to build up a margin of lead for the No. 1 Motul Autech GT-R before bringing it into the pit at the end of the 38th lap. Tsugio Matsuda replaced Quintarelli at the wheel, as the NISMO crew, known for their fast pit work, completed the it in just 40.8 of stationary time before sending the No. 1 Motul Autech GT-R back out to the track.

All attention was now focused on what the respective positions of the No. 37 KeePer Tom's RC F and the No.1 Motul Autech GT-R would be when the latter returned to the track after its pit stop. Then, with the pace slowed on the 40th lap, the No. 1 Motul Autech GT-R emerged in the lead. What's more it came out with a lead of about eight seconds. The No. 1 team had taken the lead with a strategy truly worthy of champions.

In this way, as the race entered its second half, the No. 1 Motul Autech GT-R (Matsuda) held the lead with the KeePer Tom's RC F (Hirakawa) in second, and in 3rd came the No. 6 Wako's 4CR RC F (Kazuya Oshima) that had finished its pit stop on the 37th lap, followed by the No. 46 S Road Craftsports GT-R 4th, with Katsumasa Chiyo now having replaced Satoshi Motoyama at the wheel.

With Chiyo - who had driven the No. 46 S Road Craftsports GT-R so impressively in the previous day's Q1 qualifying session - now among the leaders, he began his second-half charge with a bold overtake. On the 45th lap, having closed the gap on the No. 6 Wako's 4CR RC F in 3rd place, Chiyo pulled along side it on the 50th lap and ran through hairpin, the Revolver Corner and Piper Corner in a side-by-side battle. Oshima in the No. 6 Wako's 4CR RC F held on stubbornly, but in the same section of the track on the 52nd lap, Chiyo managed o pull his No. 46 S Road Craftsports GT-R past Oshima and move into 3rd position.

Keeping the momentum going, the No. 46 KeePer Tom's RC F began to close the gap on the No. 37 KeePer Tom's RC F running in 2nd position. As the tire performance on both cars gradually worsened, the two young drivers Hirakawa and Chiyo would fight a nose-to-tail battle over nearly the final ten laps of the race.

In front of these two, the No.1 Motul Autech GT-R (Ronnie Quintarelli > Tsugio Matsuda) kept the lead and ran on to the checkers with a 15.334-sec. margin of victory at the finish! The 2015 champion pair had won the first round of the 2016 season. This win also made Tsugio Matsuda sole holder of the record for most GT500 class career wins, with 17.

In the battle for 2nd that continued down to the wire, the No. 37 KeePer Tom's RC F (Ryo Hirakawa/James Rossiter) managed to hold off the No. 46 S Road Craftsports GT-R and finish 2nd. The No. 46 S Road Craftsports GT-R (Satoshi Motoyama > Katsumasa Chiyo) finished 3rd, enabling Chiyo to mount the podium in his GT500 debut race. His teammate and three-time champion Motoyama had to acknowledge the accomplishment with the comment, "Chiyo was amazing this weekend."

Finishing 4th after starting from second position on the grid was the No. 6 Wako's 4CR RC F (Kazuya Oshima/Andrea Caldarelli), and 5th place went to the No. 12 Calsonicimpul GT-R (Hironobu Yasuda/Joao Paulo Lima De Oliveira) that had succeeded in overtaking the No. 38 Zent Cerumo RC F (Yuji Tachikawa) on the 61st lap. Among the Honda NSX-GT Concept teams, the No. 100 Raybrig NSX Concept-GT (Naoki Yamamoto/Takuya Izawa) race stubbornly to finish 10th and earn one series point.