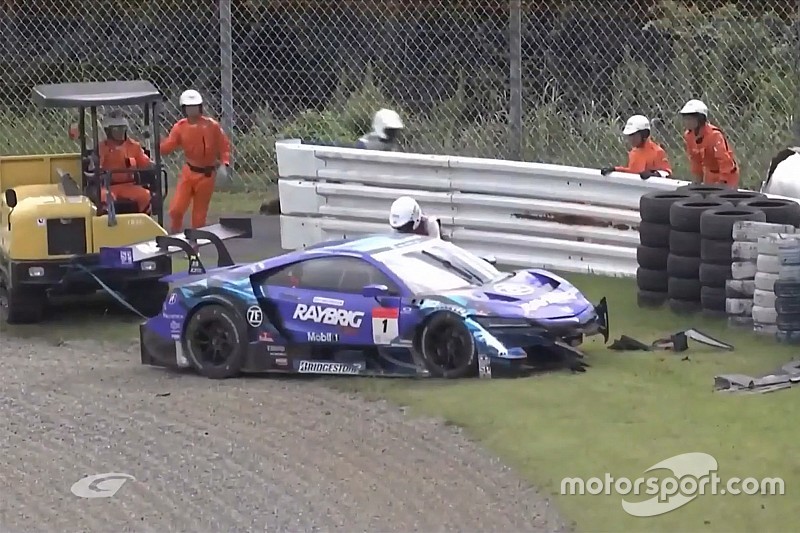 The real cause for defending SUPER GT champion Naoki Yamamoto’s first-lap crash in last weekend’s Autopolis race, which was not captured on camera, has been revealed.

It wasn't until lap three that the TV feed cut to the stricken Kunimitsu Honda NSX-GT of Yamamoto, the front of the #1 car completely destroyed after a major shunt at Turn 14.

No replays were shown, but TV images revealed damage to the front-left section of the Mugen Honda driven by Hideki Mutoh, whom Yamamoto had been battling, suggesting that the two NSXs may have been involved in a collision.

However, it subsequently emerged that the damage to the Mugen car was caused in a separate collision with the NISMO Nissan GT-R on the formation lap.

Mutoh was caught out by what he believed to be excessive weaving by Ronnie Quintarelli, rear-ending the Nissan in an incident that earned him a drive-through penalty.

“On the formation lap, Ronnie's acceleration-deceleration was so great that I bumped into him,” Mutoh explained. “It was me who crashed into him, so it’s not normal to get a penalty.”

However, Mutoh and Yamamoto did have their own run-in that eventually resulted in contact, with the incident taking place on the first lap.

According to Mutoh, Yamamoto was trying to overtake him when he dipped a wheel onto the grass, before making light contact with his Honda and smashing heavily into the barriers.

The damage the Mugen car sustained in the Quintarelli incident led many suspect that Mutoh simply took out Yamamoto, but Mutoh underlined there was only a "small hit".

“I spoke to Yamamoto about the first lap as soon as I got out of the car,” Mutoh said. “I knew he would come to [overtake from the side], so I had left enough space for one [car]. But one of his tyres ran over the grass and he hit me and spun.”

“The damage on the front was when I hit Ronnie. Car #1 [Yamamoto] hit my left-rear, but it was a small hit. There was little damage."

Autopolis marked the third time the Kunimitsu Honda has been involved in a collision in 2019 - and the second time with the Mugen NSX.

Button described it as a “racing incident” at that time, but admitted that it significantly hurt his and Yamamoto's chances of defending their title.

He and Yamamoto have now fallen 36 points behind the championship leaders Kenta Yamashita and Kazuya Oshima (LeMans Lexus) with two rounds remaining.

Future of Super GT in Thailand in doubt over costs