With two races to go in 2021, Honda’s Naoki Yamamoto is in a strong position to score a third SUPER GT in four years. Can any of his rivals still realistically deny him the crown?

Since Yamamoto and his Kunimitsu teammate Tadasuke Makino won the third round of the season at Motegi back in July, a depressing theme has emerged for the squad’s rivals.

In the last three races, a ballast-laden #1 Honda NSX-GT has qualified low down the order, with Makino having a relatively quiet first stint before inevitably pitting at the very first opportunity. Then, Yamamoto climbs aboard, pumps in a strong out lap and undercuts his way up the field before proceeding to hold position against the odds.

The numbers speak for themselves: 11th on the grid to fourth at Suzuka, 10th to second at Sugo, and then 13th to sixth last weekend at Autopolis, despite being the only car in the field saddled with the strictest stage three fuel-flow restrictor.

In fact, such has been the inconsistency of many of the #1 crew’s rivals that Yamamoto and Makino (who cannot win the title having missed the Okayama season opener) have scored the most points in the last three races barring the #23 NISMO and #12 Impul Nissan squads.

Most points in the last three races:

Currently 16 points off the lead, Yamamoto’s closest challengers are Real Racing Honda pair Koudai Tsukakoshi and Bertrand Baguette. The crimson Astemo-liveried #17 car was a slightly fortuitous winner of the Fuji 500km back in May, but since then Tsukakoshi and Baguette have not made the most of their pace.

Real Racing arguably should have won at Sugo, as Baguette had run in front of Nobuharu Matsushita in the Impul Nissan in the first stint until some aggressive defending by Toshiki Oyu’s Mugen Honda gave Matsushita the chance to get back in front and win.

That was a big enough blow to the #17 crew, but an error by Tsukakoshi at the end of the final full-course yellow period was particularly costly, allowing Yamamoto to cruise by for second. If Tsukakoshi had brought it home for second that day, the gap to Yamamoto in the standings would have narrowed to six points; instead, it ballooned to 14.

At Autopolis, Baguette was clear: beating the #1 car was an absolute must. But despite qualifying six places higher up the order, somehow the #17 car ended up behind at the finish as Tsukakoshi came home eighth, 10 seconds down the road from Yamamoto.

“We lost more points to the #1, which is a disaster for the championship,” admitted Baguette post-race. “We are still the main challengers, but it’s looking more and more difficult. It’s frustrating to see all those good results we should have had but we didn’t have in the end.” 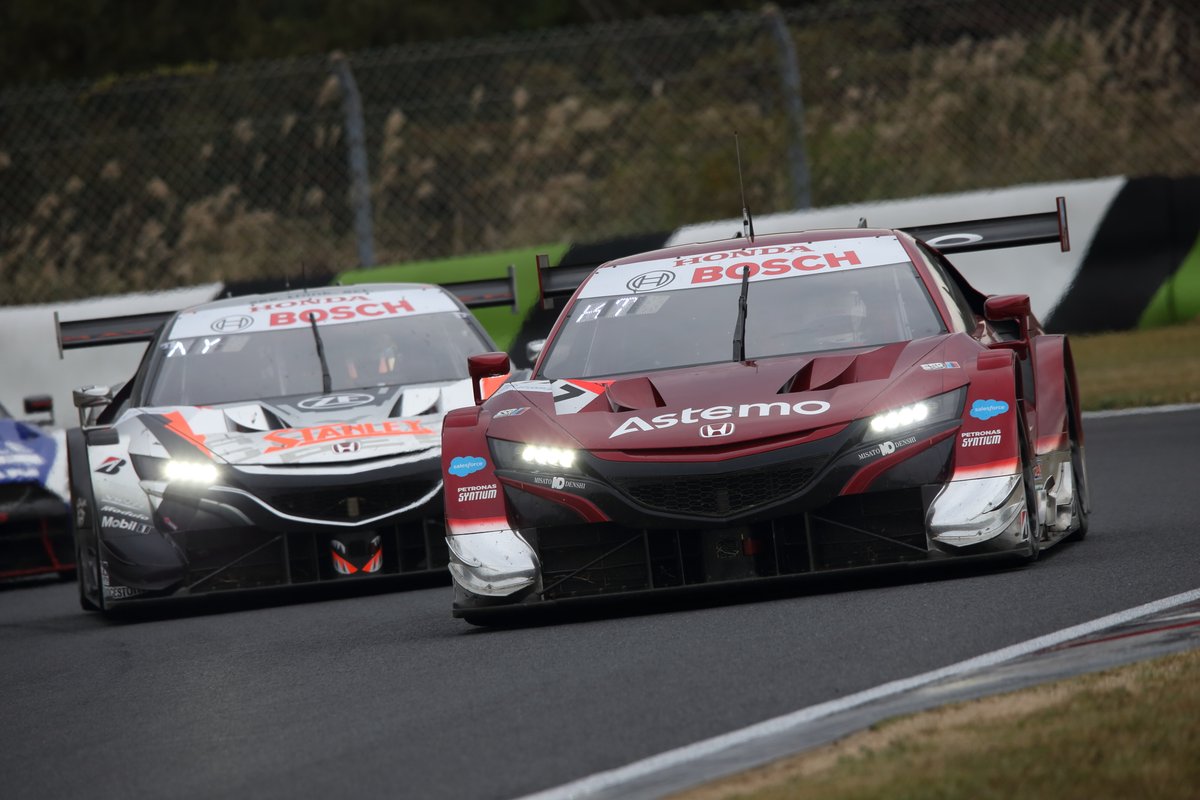 Baguette explained that the two quick-fire early safety cars effectively ruined the planned strategy of the #17 crew, which had opted for harder Bridgestone tyres than its rivals – explaining why the Belgian driver uncharacteristically went backwards at the start, and Tsukakoshi had an excruciatingly slow out lap that left the Real Honda virtually last.

“I don’t know what we could have done better,” added Baguette. “Maybe we should have gone for a softer tyre with better warm-up. We needed a clean first stint to get a gap to the #1 and we could have easily been in front, but the strategy was destroyed by the safety car.

“When Koudai got the tyre warmed up and cleared the traffic, he was fast, he was as fast as the [winning] ARTA car. I’m sure we had the pace to be at the front, but if you are in traffic there’s nothing you can do. We spent our whole race fighting other cars.”

If there was one small piece of good news for Baguette and Tsukakoshi at Autopolis, it was that Yamamoto could only manage sixth at the finish, for the chrome Stanley-liveried car was actually running third at one stage shortly after the pitstop sequence.

Nissan drivers Tsugio Matsuda in the NISMO car and Kohei Hirate in the B-Max/NDDP entry did the rest of the field a big favour by passing Yamamoto in the second stint, as did SARD Toyota man Yuichi Nakayama, who gamely held on for fifth despite engine trouble.

With a 16-point lead ahead of the final two races, Yamamoto heads to Motegi with a chance of wrapping up the title a round early – if he leaves his home track with a 22-point lead, he would be impossible to catch with only 21 up for grabs in the Fuji Speedway finale.

But there is one warning from history for the Kunimitsu team as it bids for a third title in the space of four seasons, something that’s never been done before in the GT500 ranks.

Last year, Rookie Racing Toyota pair Sho Tsuboi and Kazuya Oshima narrowly led the standings with two races to go. But, having failed to score in Round 6 at Suzuka, the Cerumo-run #14 machine likewise came away with nil point in the final two rounds, meaning that Yamamoto and Makino effectively enjoyed a 31-point swing in the final two races. 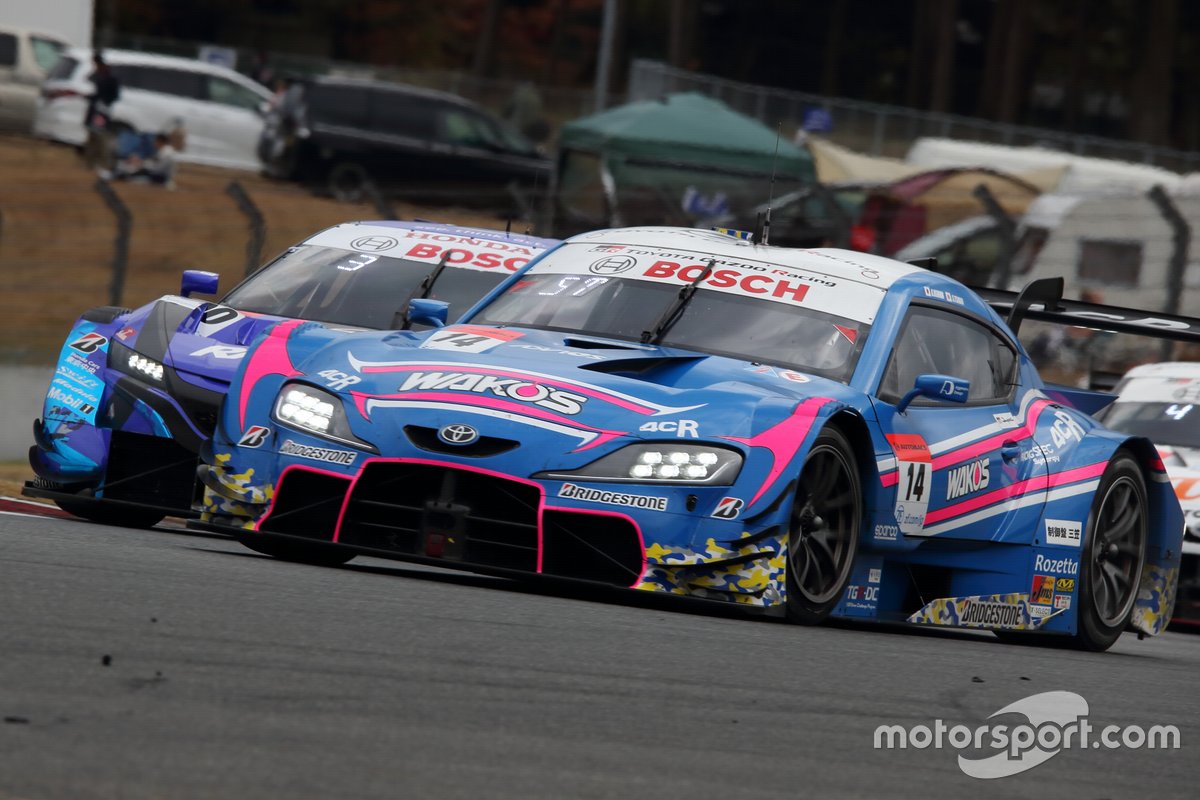 That said, the swing to the #37 TOM'S car of Ryo Hirakawa, Kunimitsu's main challenger in the event, was only 10 points, virtually mirroring the average swing away from the championship leaders in the previous three campaigns.

In the last 10 seasons, there has only been one other time that the swing has exceeded 16 points. That was in 2016, when SARD Toyota drivers Heikki Kovalainen and Hirate generated a 31-point swing in their favour against NISMO duo Ronnie Quintarelli and Matsuda, but that was an unusual case in that the season ended with a double-header at Motegi.

You have to go back all the way to 2011 (Satoshi Motoyama and Benoit Treluyer for NISMO) to find the last time one car won both of the last two races, but even on that occasion it wasn’t enough for the title. Similarly, before last year the previous time the championship leaders failed to score in the last two races was back in 2010.

All in all, the precedents from recent history suggest that Real Racing and the rest have a mountain to climb to deny Kunimitsu and Yamamoto the title. Motegi will be crucial, as with the success ballast halved it means the #1 car will be the only car in the GT500 field still carrying a fuel flow restrictor, albeit the much less severe stage one variety.

The trouble for Kunimitsu’s rivals though is that the Yamamoto/Makino combination has yet to finish a race lower than sixth. If the pair can bank another solid handful of points at Motegi despite having the heaviest car in the field, which you wouldn't bet against, nothing less than the top step of the podium will be good enough for any drivers still harbouring title aspirations.

Baguette concludes: “Since Suzuka we have found something good on the set-up and we have always been strong in qualifying since then, and if we keep doing that at some stage it will pay off if. If we have a good race at Motegi and the #1 struggles, it’s still possible. We will keep fighting until the end.”