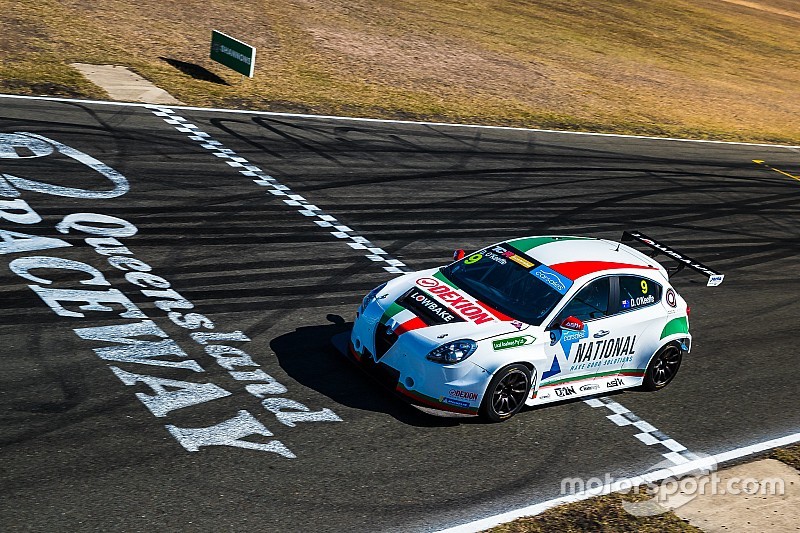 With yesterday's winner Jean-Karl Vernay sidelined for today's races, O'Keeffe was promoted to pole for the second 30-minute hit-out.

The Ash Seward Motorsport Alfa driver then gapped the field in the opening phase of the race, his lead growing to as much as 3s as the likes of Tony D'Alberto and Russell Ingall scrapped over second.

There was a brief charge from Ingall in the closing stages, the Melbourne Performance Centre Audi driver closing the gap across the last five laps.

However the veteran didn't have enough to run down O'Keeffe, who secured a well-crafted 0.7s lights-to-flag win.

"The car was great, I just tried to do a consistent lap time, nothing too silly," he said.

"Yesterday we had quite a lot of brake knock-off and brake wear, so I tried to be really careful on the brakes and front tyres.

"I saw these other two coming at me at the end, they were quite quick. Hopefully in the next race we can stay out front and build a gap."

As was the case yesterday, it was D'Alberto that run second for more than half of the race.

However the Wall Honda driver ran out of steam as the race wore on, Ingall passing him on Lap 13, before Aaron Cameron (MPC VW) demoted D'Alberto to fourth a lap later.

Cameron kept the pressure on Ingall throughout the closing stages of the race, the two MPC cars separated by less than a second at the finish.

Nathan Morcom was the best of the HMO Hyundais in sixth, followed by John Martin (Wall Honda) and James Moffat (GRM Renault).

Leanne Tander was ninth in the MPC Audi, with points leader Will Brown (HMO Hyundai) recovering to 10th after finishing yesterday's race near the back.

The final TCR Australia race from Queensland Raceway can be streamed live and free from anywhere in the world via Motorsport.TV.