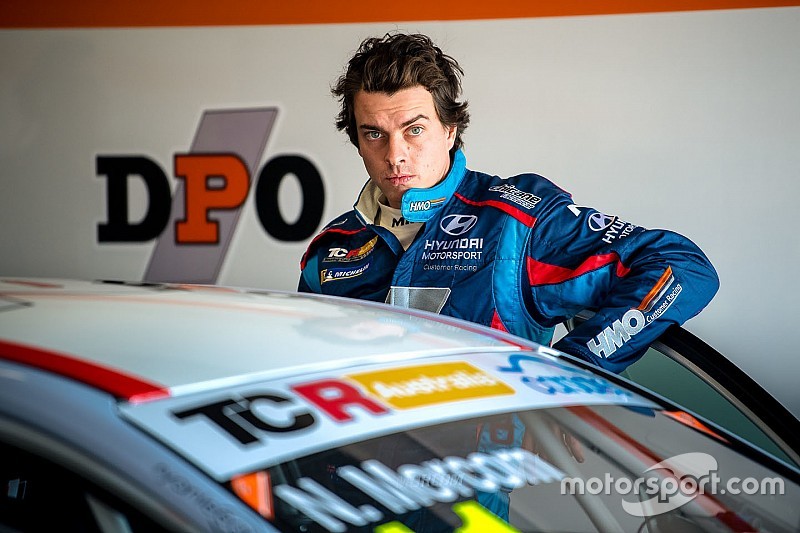 Nathan Morcom has slammed TCR Australia officials for being overzealous, after copping a minute's work of time penalties from today's third race in Sydney.

The HMO Hyundai driver was involved in three seperate incidents in the half-hour race, starting with a run-in with Jason Bright at Turn 1.

He then tangled with both of the Wall Racing Hondas, firing into the back of Tony D'Alberto while squabbling over fifth, before pushing John Martin off the track and into the Turn 17 tyres as part of a three-way fight over third with Michale Almond.

Morcom was hit with a minute's worth of penalties for his troubles, 30s for the Martin contact, and 15s each for D'Alberto and Bright.

He was also penalised for contact with Almond in Saturday's first race.

While admitting the Martin move was his fault – and even going to apologise to the former LMP2 driver after the race – Morcom was left baffled by the penalties.

He says it sets a precedent of conservatism, rather than promoting "bumping and grinding" door-to-door combat.

"There was a bit of contact. I went up to speak to Tony and John already to apologise to them for some racing incidents," he said.

"John admitted that he didn’t see me come across and it was just one of those things as a racing incident.

"I just got a whole heap of penalties from [TCR Australia] for a few different incidents. TCR is all about bumping, grinding and racing and at the moment it looks like there is not bumping and grinding and racing, like the World TCR series.

"It is disappointing because everyone knows TCR is known for bumping and grinding and racing.

"I will take the John Martin one that was too much, but it was racing incident with the Jason Bright pass – I just got up the inside of him and he got out on the marbles and lost pace.

"That is racing and passing and now I get penalty for that, so I don’t understand that."

Martin, meanwhile, said he appreciated the apology, but that it doesn't replace the points he would have scored for finishing fourth.

"I made a mistake into Turn 4 and that allowed [Almond] to get onto us," he explained. "He got me out of Turn 8; the Hyundais are so strong in the mid-range, so he was able to drive alongside me. I hung on the outside a little bit, but he was definitely in front, so I was trying to blend [behind] him.

"And all of a sudden I was in the fence.

"It is what it is. [Morcom] came over and said sorry, but it doesn't fix the car or give us any points.

"I appreciate him coming down, but it doesn't make any difference at the end of the day."