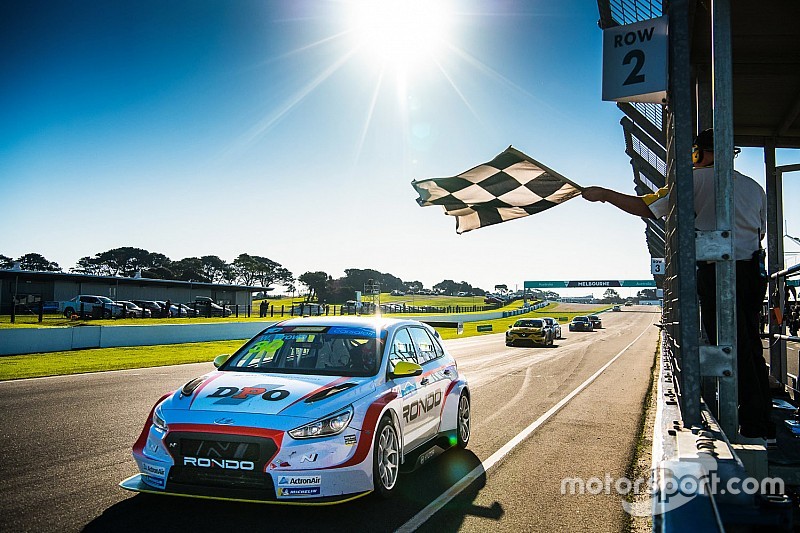 Dylan O'Keeffe's hopes of a clean sweep evaporated on the opening lap when he spun his ASM Alfa at Turn 1.

He wasn't alone, with the two Wall Hondas of Tony D'Alberto and John Martin making contact and running off the road, after D'Alberto copped an initial nudge from Andre Heimgartner's Kelly Racing Subaru.

D'Alberto managed to get going, but Martin flew backwards into O'Keeffe's passenger door, both out of the race on the spot.

Hamish Rabarits ran wide at Turn 1 as well, escorting Chelsea Angelo (Kelly Racing Holden) off on the way into Turn 2 as he tried to gather his MPC Audi up.

The first-lap antics brought out the Safety Car, the race not going green again until Lap 6.

At that point it was a HMO Hyundai one-two, Brown quickly pulling away from teammate Nathan Morcom on the restart.

Once he had a little over a second up his sleeve he managed the gap to the finish, ultimately coming home 1.7s clear of Morcom.

Aaron Cameron (MPC VW) came home third, having emerged from the early drama in fourth and then passed Alex Rullo (Kelly Racing Holden) on the restart.

Garth Tander finished fourth, a remarkable result given it seemed his MPC Audi was done for the day after his spectacular Race 2 exit. He was made to work hard for it by GRM Renault driver James Moffat, the two former Supercars full-timers staging a door-bashing battle.

Leanne Tander rounded out the Top 10 in her MPC Audi, having started the race from pitlane after her Race 2 run-in with husband Garth.

Brown leads the championship over O'Keeffe by 56 points.