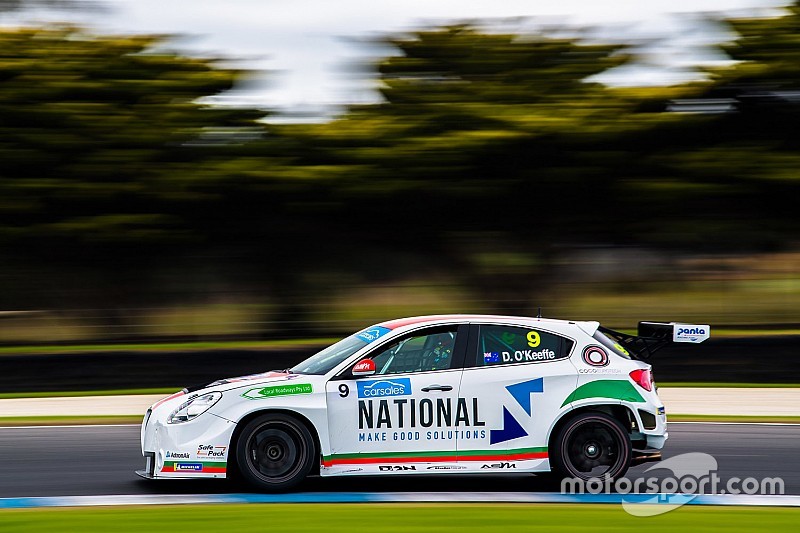 Cold conditions made rear tyre temperature hard to come by early in the session, with a number of cars off the road.

Andre Heimgartner was the first, a brake pressure issue causing him to spin his Kelly Racing Subaru on his out-lap, before Alex Rullo then fired his Kelly Racing Holden off the road at Turn 1 minutes later.

Aaron Cameron (Melbourne Performance Centre VW) then had a pair of high-speed moments at Turn 1, the second big enough that he ended up in the wall on the outside of Southern Loop.

That led to a lengthy red flag, Alfa Romeo driver O'Keeffe going into the stoppage as the pacesetter with a 1m39.952s.

When the session restarted James Moffat (Garry Rogers Motorsport Renault) jumped to the top on his first flyer with a 1m37.768s, before improving to a 1m36.827s on his second run.

With 10 minutes to go Will Brown (HMO Hyundai) took over with a 1m36.727s, before Tony D'Alberto (Wall Racing Honda) and Jason Bright (Alliance Autosport VW) both lowered the benchmark with a 1m36.693s and 1m36.662s respectively.

Brown hit back with a little over five minutes to go with a 1m36.473s, that time holding up until the dying seconds of the session.

It was at that point that O'Keeffe landed the hammer blow, a 1m35.987s putting him four-tenths clear of Brown and the rest of the field.

Bright ended the session in third, he and D'Alberto set to share the second row.

John Martin (Wall Racing Honda) and Moffat were fifth and sixth, while Garth Tander (MPC Audi) finished up seventh after ending the session in the gravel.

Nathan Morcom (HMO Hyundai) was eighth quickest, Heimgartner improved on his final run to finish up ninth, and Chris Pither (GRM Renault) rounded out the Top 10.