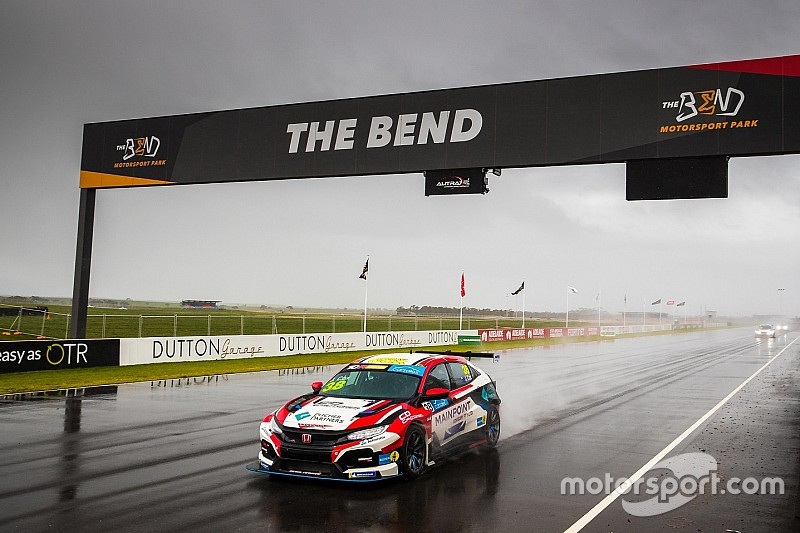 Honda drivers Tony D'Alberto and Jordan Cox set the pace in TCR Australia practice at The Bend, while James Moffat's Renault was badly damaged in a nasty crash.

Series debutant Cox made a perfect start to his TCR career by braving wet conditions to top the opening 30-minute hit-out.

The Wall Honda driver ran near the top in the early part of the session, before improving after a mid-session red flag to go quickest with a 2m10.009s.

That red flag was caused by a nasty shunt between series pacesetter Will Brown (HMO Hyundai) and Garry Rogers Motorsport Renault driver Moffat.

Looking to avoid spray being throw up by Moffat's car, Brown aquaplaned once off the racing line and careered into the back of the Megane.

While Brown got back out for Practice 2, it's yet to be confirmed if GRM will be able to repair Moffat's car before qualifying tomorrow.

“It’s definitely not the ideal way to start the weekend here at The Bend Motorsport Park,” said Moffat.

“The conditions were pretty tricky and young Will Brown was caught out by it, aquaplaned and centre-punched our Renault pretty hard.

"Will came down and saw me straight away and was very apologetic which was good of him, but hopefully our guys at GRM can fix the car and we can get back out there tomorrow.”

John Martin and Cox made it three Wall Civics in the top four, with O'Keeffe rounding out the top five.

Former Supercars start Russell Ingall, making his TCR debut this weekend, finished the day with a ninth and a 11th from the two sessions in his Melbourne Performance Centre Audi.