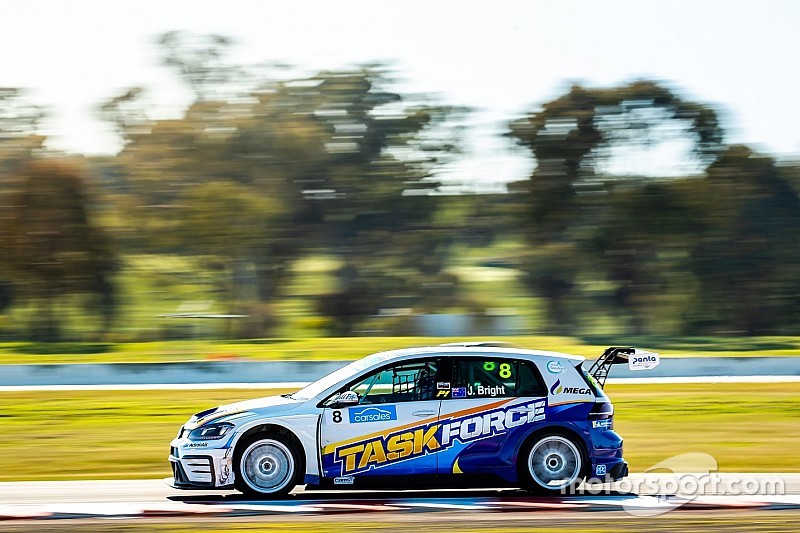 Jason Bright took full advantage of a clash between early leaders John Martin and Will Brown to win the opening TCR Australia race at Winton.

Martin emerged in front after a frantic first lap, passing Andre Heimgartner at Turn 7 before sprinting to a 1.2s lead.

Polesitter Brown, meanwhile, was shuffled back to fourth on the opening lap, after pitching his HMO Hyundai into a slide through the Turn 1/2 complex.

Brown quickly recovered from his sluggish start, working his way back to second by the end of Lap 2.

He then immediately cut Martin's advantage down to nothing, parking his i30 under the leading Honda's rear wing.

On Lap 5 Brown made his move, passing Martin into the penultimate corner before ending up on the outside of the Honda into the final corner.

The pair then made contact that left Brown in the grass, the off-track excursion dropping him back to third behind Jason Bright (Alliance VW).

Martin's challenge unravelled two laps later thanks to a left-front puncture from the Brown contact.

That left Bright in control of the race, the former Supercars star keeping Brown at bay as he racked up a second win of the season.

"We were good out of the box, the first couple of laps I could see everyone was struggling for tyre temps," said Bright.

"The car was good all race, I'm really happy."

Brown, meanwhile, was left to rue damage from the Martin clash that prevented him from taking the fight too Bright.

"I thought I left plenty of room on the inside but I just got pushed off," he said.

"I just can't stop the car, it feels so dangerous," he said.

"I'm glad to make it to the finish of that one. It was super tough, I was just trying to keep composed.

"That's one of the toughest races I've done."

Heimgartner dropped back to seventh after a half-spin on Lap 6.