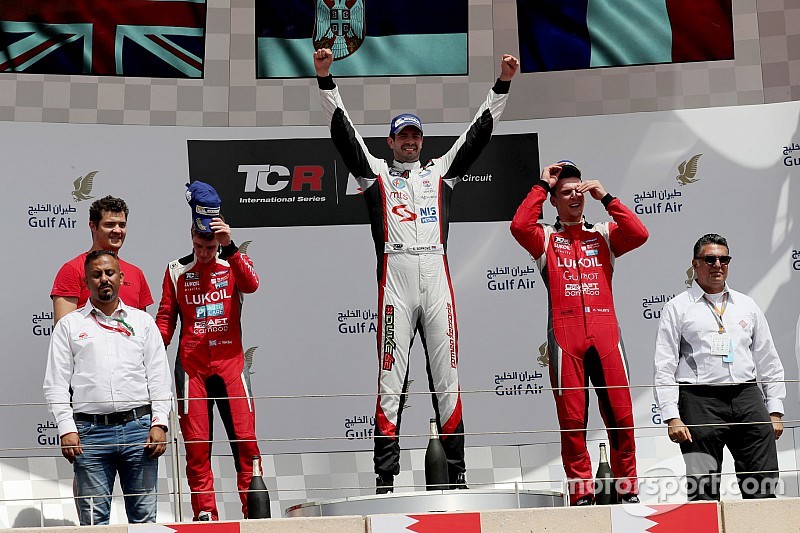 Two points cover the top three in the Drivers’ standings

Dusan Borković, driving a GE-Force Alfa Romeo Giulietta, took his first victory in the TCR International Series after a commanding performance in the stifling heat of a Bahrain Easter Sunday afternoon.

This was also the second victory for the Romeo Ferraris-built Italian car after Davit Kajaia’s in the season opener at Rustavi, Georgia.

Starting from the second row of the grid, Attila Tassi made the best start and passed both Borković and pole-sitter Ferenc Ficza going into Turn 1. Borković and Ficza quickly struck back and overhauled the M1RA Racing Honda Civic, with Borković leading from Ficza’s Zele Racing SEAT León.

The Lukoil Craft-Bamboo SEAT of James Nash and Jean-Karl Vernay in the Leopard Racing Volkswagen Golf GTi then passed Tassi, with Nash quickly snatching second place from Ficza. When Ficza then ran wide on lap 2, Vernay was one of four drivers to take advantage. Nash’s teammate Hugo Valente took third place from Vernay on lap 3 and that was how the race ended; Borković finishing ahead of Nash and Valente.

Behind the battle for the podium places, there were several thrilling fights within the top ten. Vernay held onto fourth place despite a determined challenge from the Honda of Roberto Colciago, while Pepe Oriola finished seventh, behind Ficza.

Reigning TCR champion Stefano Comini and Gianni Morbidelli made contact on a number of occasions, with the Swiss driver’s Comtoyou Racing Audi RS 3 LMS eventually finishing in ninth place, ahead of the Italian in a WestCoast Racing VW.

Davit Kajaia lost a valuable sixth place on the last lap as he coasted to a halt with a stream of oil trailing from the underside of the Alfa Romeo; the oil sump was cracked after he had jumped over a kerb.

Two points now cover the top three in the Drivers’ series; Vernay has 52 points with Borković on 51 and Colciago a further point adrift. Oriola and Kajaia – the two winners on the opening weekend in Georgia – are in fourth and fifth places with 45 and 39 points respectively.

The TCR International Series will resume for rounds 5 and 6 at Spa-Francorchamps, Belgium, on May 4 to 5, in the frame of the 6 Hours of Spa, second round of the FIA World Endurance Championship.

Quotes from the Race 2 podium finishers

Dušan Borković (1st): “I am really, really, really happy with the performance; I must thank the engineers and mechanics at Romeo Ferraris and GE-Force for giving me such a good car. I had a lot of chances to win last year but made some stupid mistakes, particularly in the first races when I was usually in the top five. Today I took advantage of being on the front row and when I saw all the fights going on after the first few corners I knew I just had to control the race. The Honda cars always make a good start but I knew I had to be in front to avoid running in the slipstream of another car and so keeping the air temperature down - luckily I know how to attack! The Alfa is much harder on the tyres than the SEAT I drove last year because of the higher torque so there are some good points for us and some not so good. I’m just delighted to win in a beautiful place like Bahrain at a Formula One event.”

James Nash (2nd): “The start is always the most important part so I was quite aggressive right at the beginning and found myself in second with a whole queue behind me. I could see Hugo was behind Vernay and I’d much rather fight with Hugo than Jean-Karl! I couldn’t catch Dušan so it was all about making sure that my second place was secure. We were all making mistakes and it was all about who made the fewest. The temperatures were really high and the tyres were struggling; it was really easy to snatch a wheel and miss an apex. I started to make mistakes over the last few laps and Hugo was catching me, but thankfully he also made some errors and created a gap for me.”

Hugo Valente (3rd): “I’m very happy. The biggest part of the job was today because starting from P8 was always going to be more difficult than yesterday. This is my third podium finish in a row and I’ve only finished three races so I’m really happy with a double podium from this weekend for sure. I said it was really important to score a lot of points this weekend and so I’m over the moon with the performance. I thought I was going to catch James at the end but I had a lot of tyre degradation as well. I’m really happy for him as he had a really difficult weekend in Georgia so it’s good to share a first podium with him; I hope there will be a lot of others this season. It was a fun race with lots of overtaking and defending and Vernay was like my bodyguard – pushing everyone off in front and then keeping Colciago behind. I’m looking forward to Spa now, I know the track and it will be interesting to see how the car behaves there.”