Gianni Morbidelli back on pole after 14 months 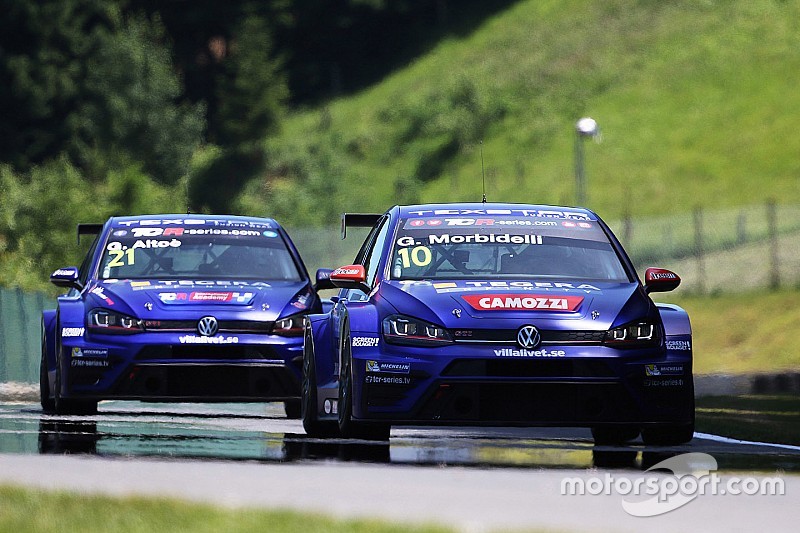 The former F1 racer is back at the front, claiming his first pole position since Imola 14 months ago

Since the TCR International Series was launched back in 2015, Gianni Morbidelli has always been one of its reference drivers. That was the case until 14 months ago, when his luck changed and he was no longer able to fight for the top positions.

Now the former F1 racer is back at the front, claiming his first pole position since Imola 14 months ago; the first since he and the WestCoast Racing team switched to the Volkswagen Golf.

Today Morbidelli was consistently among the fastest drivers, if not the fastest of the pack, throughout the second Practice and Qualifying, setting a pace that nobody was able to match. His next obvious goal is getting back to the winner’s circle in tomorrow’s Race 1.

To do this he will have to keep at bay Jaap van Lagen (Leopard Racing Volkswagen) and Daniel Lloyd (Lukoil Craft-Bamboo SEAT), who qualified second and third and so achieving their best results since they joined the championship.

The Qualifying results also confirmed this track is better suited to the Golf and León rather then the other models. None of the Alfa Romeo and Audi drivers managed to advance to Q2, while Roberto Colciago (8th) and Mat’o Homola (10th) were the only Honda and Opel drivers to qualify in the leading group.

Homola will start from pole position on the reverse grid for Race 2 with Jean-Karl Vernay alongside him, while Attila Tassi – the current championship leader – will line up 13th on the grid for both races.

Gianni Morbidelli (first): “I had almost forgotten how it feels to be in front of everyone and on pole! It’s a nice feeling and it is great, not only for me, but especially for the guys in the team, who worked so hard. After two seasons fighting for the title, it was certainly frustrating for us to go through such a difficult first part of the season with the Golf, so this is the kind of result we needed and that helps boosting the motivation. I must say that the car here has a terrific performance level and feels very good to drive. It’s the first time this year I can drive it as I really want. Nothing is done, of course, but this is a good start and we have to carry one from here.”

Jaap van Lagen (second): “I am happy to be in the TCR International Series for the second time this year. It has been a last-minute call from the team, and although I am driving almost every weekend, it is not easy to just come and do well. One always needs a little time to re-adjust to a front wheel-drive car and the rest. Today, the Golf worked really well and without a little mistake in the last corner, I think we could have been fighting for pole. First goal for me is to help Jean-Karl Vernay in the races. We will see how things develop, as Jean-Karl is not too close in neither of the grids. I would do my race only if there is no way to help him.”

Daniel Lloyd (third): “It’s my first time in the top-3 since I joined the TCR, so I am pleased, although as a driver, you always aspire to more. Everything came out nicely today, despite all the dirt on the track, I just focused on having a clear gap in front and behind me, and tomorrow I’ll be definitely fighting for a podium position… at least.”

TCR gets approval to launch UK series in 2018