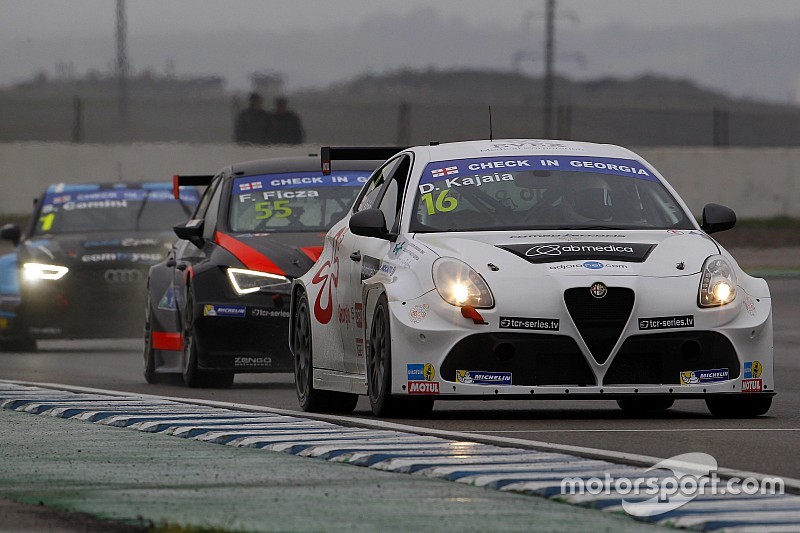 The third season of the TCR International Series couldn’t have started in a more exciting way, as the first-ever visit by the series to Georgia’s Rustavi International Motorpark resulted in two breathtaking races that delighted the thousands of fans that crowded the grandstand to full capacity.

The icing on the cake for them was local hero Davit Kajaia’s victory in the first race at the conclusion of a thrilling four-way fight that involved cars of four different brands. The Georgian policeman showed speed and a cool head in keeping his pursuers at bay and giving the first victory to the Romeo Ferraris-built Alfa Romeo Giulietta.

The second race victory went to Pepe Oriola and his Lukoil Craft-Bamboo SEAT León, which meant that for the third consecutive year the young Spaniard opened the season with a victory and so established himself as a candidate for the title fight once again.

The event also offered the young Hungarian duo of Attila Tassi and Ferenc Ficza reasons to be satisfied – each claimed one second place – together with Honda, Audi and Volkswagen (all of whom obtained podium positions).

The reigning champion Stefano Comini experienced very mixed fortunes on his first appearance at the wheel of the Audi RS 3 LMS. He first made up for a disappointed Qualifying by fighting for a podium place in Race 1, but then was forced to retire in Race 2 thanks to the consequences of a collision with his former teammate, which occurred after the end of the first race.

Although Opel struggled to stay on the pace of the faster cars and lost Mat’o Homola at the start of Race 2, the brand was eventually rewarded by its first TCR International points scored by Pierre-Yves Corthals.

After this resounding start, the series will resume over the Easter weekend at the Bahrain International Circuit in the frame of the Formula One Grand Prix.

After sprinting from pole position, Kajaia pushed to the limit and created a gap in the first half of the race, while Attila Tassi (M1RA Honda Civic Type-R), Ferenc Ficza (Zele Racing SEAT León) and Stefano Comini (Comtoyou Racing Audi RS 3 LMS) where fighting behind him.

Once Ficza managed to overtake Tassi and close the gap, Kajaia was able to keep him at bay, while Comini and Roberto Colciago (M1RA Honda Civic Type-R) were also chasing the leading pair.

Eventually the crowd roared when Kajaia crossed the finish line with a slim margin ahead of Ficza, while Comini kept third place despite Colciago’s last effort.

Davit Kajaia (winner): “I am more than happy, it is so great to win my first race here at home, I have no words... I just want to thank my country for all the support, the team that did a fantastic job and TCR for bringing such a great show to Georgia. The race was very tough. My start was good and I could build some gap, but as from lap 6, my front tyres started to suffer and then I had to fight to keep Ficza at bay.”

Ferenc Ficza (second): “I am very happy was second, it’s a good result. My start wasn’t that great, then I could pass Tassi, but Comini’s car was getting larger and larger in my mirrors. At the same time, we were reducing the gap to Kajaia and got really close but there was no way to pass him.”

Stefano Comini (third): “First of all, I want to congratulate Davit for his fabulous win, he did a superb job. I am very happy for all Georgians, who have welcomed us so warmly. My race was good, to finish on the podium for our first race as a team and with the Audi is an excellent result. I had a contact with Jean-Karl Vernay on the first lap; I had the inside line and he hit me. He went sideways and I actually pushed him a bit to get his car straight again. After crossing the line, he hit me on purpose breaking my radiator, which was so silly…”

Pepe Oriola confirmed his winning record in the opening event of the TCR International Series; after being victorious at Sepang in 2015 and Bahrain in 2016, the Catalan won the second race in Georgia.

Oriola beat his Lukoil Craft-Bamboo teammate Hugo Valente, while Attila Tassi claimed third position ahead of Jean-Karl Vernay. While the two SEAT León cars of Oriola and Valente pulled away when the race resumed after the safety car, there was a red-hot fight for the fifth position. Eventually Dušan Borković managed to resist the pressure from the likes of Ferenc Ficza, James Nash and Roberto Colciago, while Pierre-Yves Corthals finished tenth and became the first Opel driver to score championship points.

Following the race 2, the Stewards reviewed video evidence of two incidents and handed 30-second time penalties to Valente (who dropped from second to ninth) and Colciago (who dropped from sixth to 12th) for overtaking under yellow flags.

Pepe Oriola (winner): “It’s the third year in a row that I manage to win a race in the opening event of the TCR International Series, it seems that I come always strong out of the winter... It’s really nice to win a race after the difficult event we had, with a bad qualifying and lots of trouble. My start wasn’t great, because I was on a line still humid and my wheels got spinning, but I could keep Hugo behind, then I pushed hard to try to build some advantage. It wasn’t easy because it was not very clear if it was raining or not and as the race leader you always risk to be caught by surprise first…”

Hugo Valente (second): “It’s great for the team to end a difficult weekend with a 1-2. It’s also a good result for me for a first outing with a new team and a new car. At the start, I got side-by-side with Pepe, we even touched slightly, and after that my steering wasn’t that precise on left turns. I coul never really attack Pepe, but the objective was to score heavy points.”

Attila Tassi (third): “I am happy with the podium and with my performances throughout the weekend. I could not hope on such a weekend before it started, especially given that I was driving the Honda for the first time. In Race 2, Pepe and Hugo were far away in front, but I had a good fight with Vernay and could defend third.”