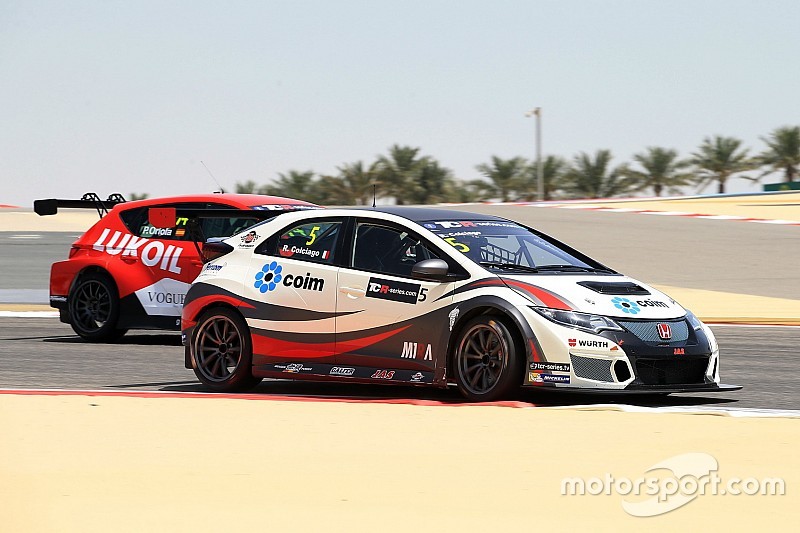 Roberto Colciago claimed his second TCR International Series victory after last year’s win at Sepang, which also occurred during a Formula One event.

The M1RA driver and his Honda Civic Type-R made a perfect start and overhauled both the pole-sitter Pierre-Yves Corthals and Hugo Valente to lead the field going into Turn 1. That turned out to be the critical move as far as Colciago was concerned and the Italian driver led for the remainder of the nine-lap race. Valente drove a sensible race to finish second, the SEAT León never really threatening Colciago, while Jean-Karl Vernay finished third after a thrilling series of battles with Corthals, James Nash and Dušan Boković ended with Boković making contact with Corthals, which allowed Vernay’s Volkswagen to dive past the pair into a podium place.

In all, five different car brands filled the first five places with Boković’s Alfa Romeo and the Opel Astra of Corthals joining the Honda, SEAT and Volkswagen of the podium finishers. Stefano Comini’s Audi finished eighth making six brands in the top-eight.

Corthals suffered from power-sapping high engine temperatures in the race’s last few laps while it was a brake problem that caused Borković to run into Corthals and so ultimately deny the Opel a top-three finish.

In the Drivers’ championship, the result means four drivers are within a point of each other; Colciago and Vernay both have 40 points while the two race winners in Georgia Pepe Oriola (who finished sixth) and Davit Kajaia (who retired with a broken driveshaft) each have 39.

Quotes from the Race 1 podium finishers

Roberto Colciago (1st): “It might have looked easy, but it wasn’t! The start was really good and after four or five laps, there was a good gap behind me. I didn’t push so hard at the beginning of the race so my tyres were still good for the second part. It’s really important not to make any mistakes at this circuit – I made one small mistake when I braked at the end of the straight, but afterwards I made no more. In the championship, there are many, many good drivers and we are always within two or three tenths, so it is much too early to be thinking about that.”

Hugo Valente (2nd): “I was quite happy with my start but I know the Honda is always very strong off the line; I don’t have a lot of experience yet with this car and we couldn’t practice starts yesterday. Roberto managed his tyres well at the beginning of the race, he made a mistake but I made a few too. I maybe could have overtaken him, but it was too risky and I need to score points for the championship, so I cooled down a bit and he was just too fast. After that, I was looking in my mirrors and also enjoying watching the big TV on the straight! I think tomorrow will definitely be more exciting and I’ll be looking for another good result for the team again.”

Jean-Karl Vernay (3rd): “My start was just terrible, so I need to work on my coordination because I’ve been struggling with that for a few months now. I was lucky not to spin on the first lap, but after that I tried to be a little bit calm. We had a small engine problem, as sometimes there was no power when I was back on the throttle. I lost a lot of time behind Borković because he did a good race and was quite fast on the straights so the only way to overtake him was to wait for a mistake and in the end it happened. I think we deserved the result – my team did a great job and the car was really, really quick so let’s see how we do tomorrow.”