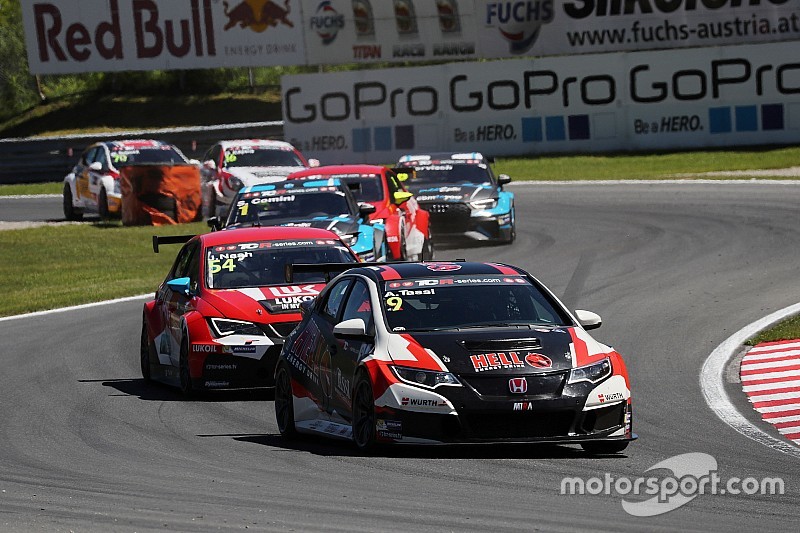 Built in 1997 and partially modified in 2007, this modern racetrack has always been a favourite of Touring Car drivers for its demanding layout that offers several opportunities to overtake and German fans enjoy the door-to-door battles between the cars.

Last year, Mat’o Homola claimed his first TCR win in the first race, beating Dušan Borković and James Nash who finished second and third again in the second race that was won by Pepe Oriola.
The SEAT cars dominated the event, as they filled the top-five places in both races.

This year the TCR competitors will use the circuit’s older layout that includes the smoother “esses” at the end of the pit straight instead of the sharper left-hander. This is to limit the risk of a pile up at the start and to favour overtaking manoeuvres.

Track activity will be concentrated into two days: two Free Practice sessions and the Qualifying on Saturday, with both races on Sunday.

The previous event at the Hungaroring turned out very much in favour of Hungary-based M1RA. Attila Tassi claimed his first TCR victory in Race 1 and immediately encored in Race 2, jumping to the top of the Drivers’ classification in the process.

His teammate Roberto Colciago was classified fourth and fifth, which helped him to retain the second position overall, six points behind his teammate.

Jean-Karl Vernay of Leopard Racing was a podium finisher (third) in Race 1 and was able to stay third in the standings with a gap of 13 points, while Stefano Comini, who had arrived in Hungary as the series leader, had a disappointing weekend and dropped to fourth. However, the Comtoyou Racing driver remains within striking distance, 25 points behind Tassi.

Pepe Oriola of Lukoil Craft-Bamboo ranked fifth and second in the two Hungarian races and remains in contention for the title fight; fifth in the standings with a gap of 42 points.

TCR at Oschersleben – the event at a glance

Difficult round for Romeo Ferraris in Budapest

TCR gets approval to launch UK series in 2018