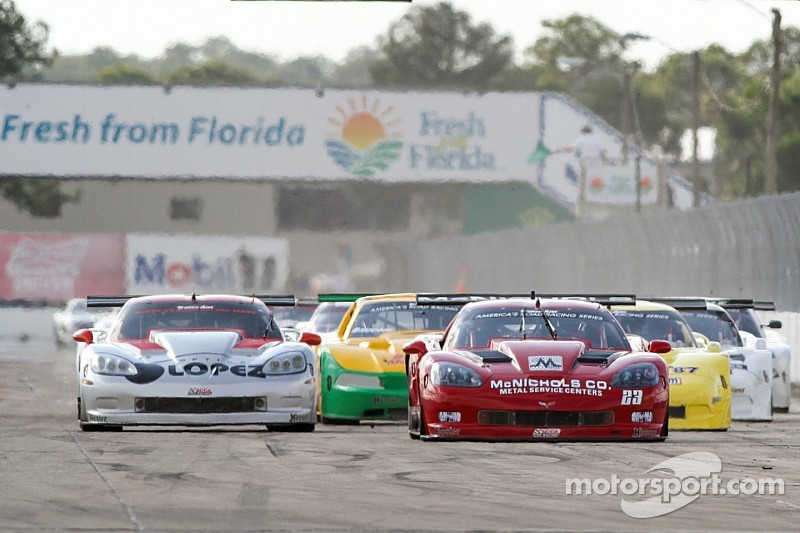 Sebring, Fla. – It was Amy Ruman and the No. 23 McNichols Company Chevrolet Corvette who emerged victorious at the FOAMETIX Trans Am 100 at Sebring International Raceway and at the front of the record setting 69-car field, after a vigorous battle in the TA class in which she fended off the likes of RJ Lopez, Simon Gregg and defending Champion Doug Peterson.

“I couldn’t be happier with the McNichols 23,” said Ruman. “The car was just a rocketship today; I’m so proud of our crew and my father who gave me a great car for the race. We’ve got a PME engine under the hood like we did at Daytona, and we’re two for two with it. It’s a great way to start off the year for us and McNichols Company!”

In TA2, Cameron Lawrence, driver of the No. 1 MOPAR Dodge Challenger and defending TA2 class Champion, captured his third consecutive win at Sebring International Raceway and in doing so started his title defense in stunning fashion—leading the majority of the race.

“You always want to try and stay out front of most of the chaos,” said Lawrence. “I was really pleased with the pole position we had and a little surprised by it. I wanted to run up front and just run a clean race. There was a little mishap up front so we fell back to second for a bit, but we were able to retake the lead. The car performed well—it’s great to have support here from MOPAR, they’re helping out, making sure the engine is reliable; they’ve done a great job. We’re happy with the win “

Rookie Gar Robinson, in the No. 74 Ranch Resort Chevrolet Camaro, finished second to Lawrence while rookie Lawrence Loshak in the No. 5 Raybestos Powertrain/ ETE Reman Ford Mustang finished third as all three models—Challenger, Camaro and Mustang—landed on the TA2 podium.

The TA3 class was split by Todd Napieralski, in the No. 39 Tremec/SKF/Backstreet Performance Chevrolet Camaro, who captured the American Muscle Group, and Lee Saunders, in the No. 84 Landsearch LLC Dodge Viper, who won the International Group.

The race began with Ruman on pole of the 69-car Trans Am field, with RJ Lopez, in the No. 16 Optica Lopez Chevrolet Corvette, alongside and Doug Peterson in third position, with all three powering ahead while Fix and Simon Gregg, in the No. 59 Derhaag Motorsports Chevrolet Corvette, also pursued. However, the initial racing was short-lived, as the track went under a full course yellow with multiple incidents reported around the circuit.

In TA2, Lawrence started on pole but was overtaken immediately by the No. 34 Bestline Superior Lubricants Ford Mustang of Tony Buffomante, while Adam Andretti in the No. 44 Engineered Components Chevrolet Camaro started third. However, during the full course caution Trans Am officials determined that the No. 34 had jumped the start and was given a drive through penalty. Lawrence moved back up to first, Andretti to second and Shane Lewis, in the No. 73 74 Ranch Resort Chevrolet Camaro, moved into third.

Upon the restart, RJ Lopez immediately began to challenge Ruman for the lead, eventually overtaking her on the tenth lap of the race as Paul Fix moved into third after a drawn out battle with John Baucom, in the No. 86 Baucom Motorsports Ford Mustang, for the position.

The course then went back under yellow to retrieve the 91 TurnKey Industries Chevrolet Camaro of Joe Napoleon, which was stopped on course after contact with the wall at turn 17.
On the ensuing restart, RJ Lopez and Paul Fix simultaneously challenged Ruman for the lead with the cars going three wide into turn one, and while Lopez appeared to have the inside edge, Ruman was able to retain the lead into turn two. Shortly afterwards Lopez’s car began to fade as he slid back through the field, momentarily crossing paths with Simon Gregg who was charging up the field. Gregg had been as far back as eighth position but quickly moved up from fifth to third in three laps before assuming second position behind Ruman.

In TA2, Cameron Lawrence was holding strong in the No. 1, but the field behind him was continuously changing and churning. Adam Andretti spent most of the race hot on Lawrence’s tail but began to fall back after the 22nd lap, as the No. 44 visibly slowed.

At that point Gar Robison and Tony Ave, in the No. 70 Lamers Motor Racing Ford Mustang, began to close down the TA2 top five. Ave, who started 28th in the 30-car TA2 field, had worked his way up throughout the race, his progress slowed only by full course cautions. Ave’s charge from the back saw him rise up to third position before falling victim to the slick conditions of the track, an opportunity that Garr Robinson seized, moving up into third and then second position.

Ruman was able to outlast all challengers for the duration for the race, including Gregg’s charge which fell just short after the No. 59 of Gregg and No. 87 of Peterson made contact and Gregg spun and was unable to continue. Ruman would cross the finish line, capturing the Foametix Trans Am 100, Round 1 of the 2015 Trans Am Championship, her sixth career victory. Peterson and Fix would finish second and third while Cliff Ebben, in the No. 36 Stumpf Ford/McMahon Group Ford Mustang, and Kenny Bupp, in the No. 3 American Speed Factory Chevrolet Camaro, finished fourth and fifth.

While Lawrence captured the podium in TA2, rookies Gar Robinson and Lawrence Lowshak added fresh faces to the podium. Tommy Archer, in the Quad Systems/C3Controls Chevrolet Camaro, finished fourth while Tony Ave righted the No. 70 to secure fifth place.

Todd Napieralski’s win was his third victory in TA3 American Muscle and his first at Sebring with Trans Am. Napieralski started the race in second position, chasing defending Champion and pole sitter, Ernie Francis, Jr., in the No. 9 Breathless Performance Chevrolet Camaro, for much of the race. However, Napieralski outlasted Francis as the No. 9 began to smoke and was forced to pull off, ending the defending Champion’s day.

“This is the first race of the year for us,” said Napieralski. “We had to do a lot of testing and shakedown on the go this weekend, but we performed well and were able to survive the carnage and hang on for a win. We’re happy for the victory and all the support that Tremec and SKF give us—you’ll be seeing a lot of us this year.”

Jason Fichter, driver of the No. 79 Breathless Racing Chevrolet Camaro, would finish second in his first-ever Trans Am start; while Christopher DeSalvo, in the No. 61 Baucom Motorsports Ford Mustang, finished third.

“I had some great support this weekend,” said Saunders. “I had two great friends here working with us at the track, helping us get an edge on the competition. I’d particularly like to thank my father, who has always supported me in my racing and all the help he’s always given. This one is for him.”

David Mazyck, driver of the No. 60 Serpent Speed Dodge Viper, finished second as Vipers went one-two atop the International Group podium; and Jerry Greene, in the No. 93 Temp Air/Prosche 996 GT3, finished third.

The FOAMETIX Trans Am 100 at Sebring set the all time record for Trans Am entries in a single race at 69, and 73 cars participated in sessions throughout the weekend.

Trans Am will next take to the track at Homestead-Miami Speedway on April 12 for Round 2 of the Trans Am Championship. 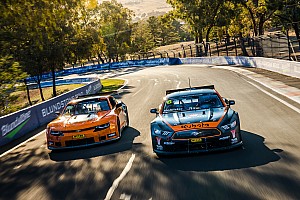