Peterson on the cusp of Championship heading into VIR 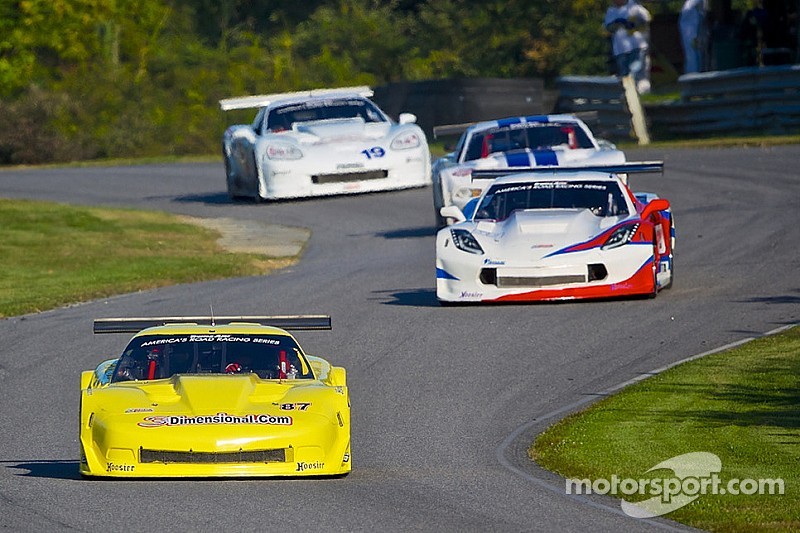 ALTON, Va. – As a track record 41-car entry for the Trans Am Series prepares for Round 10 of the 2014 Trans Am Championship at Virginia International Raceway (VIR), Doug Peterson, driver of the No. 87 3Dimensional.com Chevrolet Corvette, will also do so, with the knowledge that a strong performance will see him clinch the TA Championship for the second year in a row.

If Peterson finishes the race at VIR with over a 36-point lead on the TA class runner-up the Championship will once again reside with the No. 87 and Tony Ave Racing. Currently, Peterson’s lead over Simon Gregg, Driver of the No. 59 Derhaag Motorsports Chevrolet Corvette, is 39 points with Peterson’s total at 257 and Gregg’s 219. Peterson’s lead comes curtsey of another season of storming through the TA field, this time with five wins in the past nine rounds of racing behind the wheel of the No. 87.

If Peterson does sustain his points lead, he’ll be entering into some rarified air at the top—only a select few drivers have managed to capture two Trans Am Championships, and even fewer have managed to accomplish the feat in back-to-back years. Those drivers being Tony Ave, Paul Gentilozzi, Tommy Kendall, Wally Dallenbach, Jr., Peter Gregg and Mark Donohue.

Last year it was Simon Gregg who emerged victorious at VIR, edging Peterson and Fix, who went second and third. If Peterson can muster a similar effort come race day, history awaits.

After the first ever win in TA2

In TA2, Cameron Lawrence rides into VIR in full stride after putting the No. 1 CTEK/NorthStar Miller Racing Dodge Challenger atop the podium at Lime Rock Park, the first ever win for Dodge in the TA2 class. The result added to Lawrence’s points lead over runner-up Adam Andretti, in the No. 44 Engineered Components Chevrolet Camaro, but the TA2 Championship remains very much in a contested state, with only 21 points separating the two drivers in a race that will likely last until the finale at Daytona. A strong showing at VIR would create an excellent springboard for either driver as Daytona approaches.

Joining them will be a 16-car TA2 field, with several entries of note. Returning after a one race absence will be Tommy Kendall, in the No. 11 Miller Racing Dodge Challenger, reuniting the Miller Racing duo with Lawrence. Making his TA2 debut will be Steven Kent, Jr., in the No. 17 XLR8 Diesel Trucks/ SKS Equipment Ford Mustang, who previously competed in the TA3 class, while Keith Prociuk will make his Trans Am debut in TA2 for Archer Racing in the No. 42 HPTuners Chevrolet Camaro.

Tony Buffamonte will be making his return to TA2 in the No. 79 Philmore Power Chevrolet Camaro with Mike Cope Racing Enterprises, only his second appearance in Trans Am—his first culminated in a victory at Canadian Tire Motorsport Park in 2013. Alongside him will be teammates Ron Keith, in the No. 25 Offsite Image Management Ford Mustang, and Kevin Poitras, in the No. 73 Post Plastics Chevrolet Camaro, who are currently third and fourth in the points, leading the way for the rookie team.

The youngest Trans Am Champion of all time ?

TA3 will also be in full force at VIR with 10 entries slated to compete in the American Muscle and International Groups. Leading the way will be Ernie Francis, Jr., who at only 16 years of age is well positioned going into the final two races of the year to become the youngest Trans Am Champion of all time, but first he’ll have to power the No. 9 Breathless Performance Chevrolet Camaro past the likes of Rich Jones, in the No. 37 Jomac Truck Bodies and Cranes/ Deb’s Peppers Ford Mustang, Todd Napieralski, in the No. 39 Tremec/SKF/Backstreet Performance Chevrolet Camaro, and defending Champion Chuck Cassaro, in the No. 76 StackData Aeromotive/ Mettalicca Ford Mustang.

Betts currently holds a one-point lead Berkeley, 145 to 144, but Snow remains well within striking distance with 138 points in what is shaping up to be a three-way charge to the finish line for the TA3 International Group Championship.