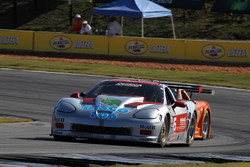 Driving the No. 6 Disco 106/ECR Engines/Goodyear Chevrolet Corvette, Lopez swept the event by taking pole, setting the race’s fastest lap and leading every lap en route to his third career Trans-Am victory. He beat Cliff Ebben, from Appleton, Wis., by 13.484 seconds in the 28-lap (103.6-mile) race. The race was slowed once by a full-course caution to move the No. 77 Rotary X-treme/MAZDASPEED/Goodyear Mazda RX-7 driven by Glen Jung, of Osteen, Fla., to a safe location after he punctured a tire.

It was Lopez’s first Trans-Am victory since winning the second-to-last round of the 2010 season at Virginia International Raceway and moved him to the top of the points chart with one of nine races in the books. Lopez leads Ebben by 25 points, 135-114.

“It was pretty cool,” Lopez said. “We were able to dominate. We put down a really good lap time in qualifying and in the race, it was basically two races, it was a race to the yellow and the race after it. My mission was just to conserve the car. Nobody kept up with me, so I pulled away a little bit but I really was just conserving. The car was just awesome. After the yellow, I just took off. For a few laps there I ran real hard, then I backed off it again and I settled in a comfortable pace.

“It feels really great to win here. Sebring has always drawn a big Latin crowd, a lot of people from the Latin community. My dad used to race here in the ‘80s and a lot of other people from the Dominican Republic, so to get a win here especially in my first time here, is really, really awesome. It means a lot to me. I’m just excited. I guess we’re leading the points again and we’ll see what we do from here.”

After starting third in the No. 36 McMahon Group/Stumpf Ford/Lamers Racing Ford Mustang, Ebben moved up to second around defending series champion Tony Ave, of Maiden, N.C., on the third lap of the race. He maintained that position throughout the race to earn his best Trans-Am result since winning the 2009 season finale at Road America.

“It feels real good,” Ebben said. “Tony had a few problems, so it was my advantage. I just kind of stayed there. I was pretty sure I couldn’t catch RJ, so I just kind of ran at a comfortable pace, kept everything together and took what I got.”

Despite the fact that his No. 4 Lamers Racing/McMahon Group/Optech/PME Engines Chevrolet Corvette sounded a bit off key for most of the race, Ave managed to bring home a third-place trophy from Sebring. He started second and fell back as far as fourth for a time before coming back to the final spot on the podium.

“We were down on power,” Ave explained. “The engine, of course, was great from Pro Motor, but I had something wrong with what we were doing. We thought it was electronics, and I think it might be in my carburetor, but anyway, we were down about 1,000 rpm. It’s a testament to the motor that we could run that good when there’s something screwed up. Normally, we would have just run off and hid, but you can’t give RJ that kind of advantage because their guys are pretty good. I did the best I could.

“I saved everything for the caution and I really went hard after that. I could kind of hang with them until they sort of got their tires warm, and then I just took what I could get. It’s disappointing, but at the same time, it’s about the championship. We finished third at the opener last year and it turned out OK, so for Lamers and everybody that helps me out, Pro Motor and everybody, we’ll be in Miller and hopefully we’ll be stronger.”

Making his Trans-Am Series debut at Sebring, Charles Wicht, of Big Pine Key, Fla., wound up fourth in the No. 92 Wicht Racing/Crystal Clear Pools Chevrolet Monte Carlo. He finished one spot ahead of Blaise Csida, of Stouffville, Ontario, Canada, who came home fifth in the No. 07 Gateway Racing Inc. Chevrolet Corvette.

In the debut of Trans-Am 2 (TA2) class as a points-paying category in the 2011 Trans-Am Series, Gregg Rodgers, of Southlake, Texas, took the victory in the No. 40 PinnacleAutosports.com/Eagles Canyon Raceway/Petfinder.com Chevrolet Camaro. Rodgers inherited the lead from class polesitter Tony Amico, of St. Petersburg, Fla., who led most of the race in the No. 78 Caddy’s on the Beach Chevrolet Monte Carlo before a tire problem removed him from contention.

“I’m really excited about TA2,” said Rodgers. “It’s bringing a whole different facet to SCCA Pro Racing. It’s great, the competitors are great and it’s a great recipe on the car. I’m excited for the 2011 Camaro. We just finished the thing a week ago and with zero test time we brought it to Sebring because we wanted to support SCCA Pro Racing. We’re really happy with it. It’s got some work, but as a whole I think TA2 is a growing class. There’s a lot of interest in there and if we can just get everybody to embrace Trans-Am, I think we have a great future ahead.”

Next up for the SCCA Pro Racing Trans-Am Series will be Round 2 at Miller Motorsports Park on the weekend of April 30-May 1 alongside the Pirelli World Challenge Championships.