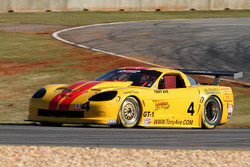 SEBRING, Fla. (March 16, 2011) – Defending SCCA Pro Racing Trans-Am Series champion Tony Ave, of Maiden, N.C., picked up where he left off last season in today’s opening practice session of the 2011 season at Sebring International Raceway by posting the quickest time in the session.

Topping the time charts was a regular occurrence for Ave in 2010, and while he did it again today, an expanded field and the addition of the new Trans-Am 2 (TA2) class will make things look substantially different this year beginning with the season opener on Friday morning.

“It’s totally different, because I expect to see some cautions now that we didn’t used to see,” Ave said. “I used to be able to just get out front and then kind of cruise, but you’re not going to be able to do that now. I think you’re going to see more yellows. I think it’s better for the racing. It gives us something else to deal with. If you get behind, you can count on lapping those guys and using them. I think it’ll be a better race, but it changes the strategy. You have to be a little more careful and conserve your stuff too.”

Also picking up where he left off last year in opening practice was 2010 championship runner-up RJ Lopez, of Santo Domingo, Dominican Republic. Lopez posted the second quickest lap of the session in his silver and red No. 6 Disco 106/ECR Engines/Goodyear Chevrolet Corvette at 2:03.478 (107.873 mph).

Lopez and Ave both pointed out that today’s session, run in the early afternoon, had different conditions than what they expect from qualifying tomorrow and the race on Friday, as both will be run in the morning. That said Lopez was still pleased with his performance this afternoon.

“It went pretty good,” Lopez said. “We went real quick in the first (promoter test) session (this morning). The track lost about two seconds (this afternoon). I was kind of digging for more and I stayed out there for a real long time. It was basically my first lap that I did the quick time and then I just kept digging and digging and just kept going backwards. We’re real happy to come back to the first race and run second so far.

“We missed pretty much the whole (promoter test) day yesterday. We’re going to do some changes to the car. This track got super slippery. It gets real slippery when the sun is out and with these big cars and big horsepower. We’ve got a little bit of work to do to catch up to Tony. I think we just need a little more track time and maybe making a couple adjustments and we’ll get him. I’m looking forward to qualifying.”

In the TA2 class, which makes its debut as a points-paying category in this weekend’s season opener, Tony Amico, of St. Petersburg, Fla., posted the quickest time at 2:19.807 (95.274 mph) in the No. 78 Caddy’s on the Beach Chevrolet Monte Carlo. Gregg Rodgers, of Southlake, Texas was second in the No. 40 PinnacleAutosports.com/Eagles Canyon Raceway/Petfinder.com Chevrolet Camaro at 2:20.368 (94.893 mph) and J. Thomas “Hollywood” Graham, of Clearwater, Fla. was third in the No. 7 Financial Knowledge Network/PMS Motorsports Ford Taurus at 2:21.109 (94.395 mph).

Trans-Am round one preview