St. Petersburg, FL (Feb 23) The inaugural 2003 Grand Prix of St. Petersburg today marked the return of rolling thunder to the streets of downtown St. Petersburg. It also marked the 56-lap season opener of the Trans-Am Series for the BFGoodrich ...

St. Petersburg, FL (Feb 23) The inaugural 2003 Grand Prix of St. Petersburg today marked the return of rolling thunder to the streets of downtown St. Petersburg. It also marked the 56-lap season opener of the Trans-Am Series for the BFGoodrich Tires Cup. Twenty of the country's top sports car specialists took the start on the 14-turn, 1.78 mile course. 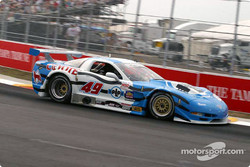 Randy Ruhlman, the 2002 winner of the BBS Wheels "Most Improved Driver of the Year", campaigned the familiar #49 blue and white Preformed Line Products/Coyote Closure Chevrolet Corvette to a heartbreaking thirteen place finish, after his car suddenly ran out of gas with eight laps left. Closing in on fifth place at the time, Ruhlman was forced to limp to the pits where he took on needed fuel, losing a lap to the leaders in the process, and dashing all hopes of another top five finish.

Making his 127th start in Trans-Am, Ruhlman had the dual task of debuting a new car and making his first Trans-Am start with his new team, Derhaag Motorsports. Practice and qualifying were used to try to find a setup that worked for the wide-open street course. Qualifying only twelfth, major adjustments were made for the Sunday morning warm-up and finally some more refinements were made for the 4PM race.

"The car didn't handle all that well in the beginning of the race. It was hard to find a good balance and get grip in both the front and rear of the car. After the tires got some heat in them and we burned off some fuel, the car came in nicely and I was able to move up through the field," said Ruhlman. "We had a yellow flag about half way into the race and I had a chance to get back some of the distance I had lost in the beginning. After that, I was able to set guys up and pass pretty easily. With about ten laps left, we had a final yellow to bunch the field, and we had made it up to seventh. I was closing in on Hayner [who finished fifth], and suddenly we had no power. We had run out of fuel. I had to use the starter to "bump start" myself back to the pits, but it was a long way from Turn 10 to the pits. It was frustrating seeing a top five just pulled away like that."

"The guys are going to figure out what went wrong," continued Ruhlman. "We knew we were going to be tight on fuel if it went green the whole way, but with the yellows we should have made it. Once the crew gets back to the shop and takes apart the fuel cell, we should know more. The really encouraging thing is that we were able to take an absolutely brand new race car and make it a fast, top runner. We have a strong car. It is just unfortunate that sometimes these things have to happen. With five weeks to go before Long Beach, it gives the crew plenty of time to sort things out. I always look forward to going back to Long Beach and I know that we will be extremely competitive."

In addition to the on-track racing activities, Ruhlman was among a group of Trans-Am drivers, who donated their time Saturday afternoon to visiting kids in the All Children's Hospital in St. Petersburg. The drivers signed autographs and visited with children at the largest pediatric oncology center in the area.

Ruhlman has hooked up for 2003 with Minneapolis based, Derhaag Motorsports. The team has fielded many successful drivers, including top Trans-Am drivers Justin Bell, Kenny Wilden, Tony Ave, Dorsey Schroeder, Chris Neville and Darin Brassfield. Jim Derhaag himself made 150 starts as a driver in the Trans-Am Series before his successful move to full time ownership in 1998.

Preformed Line Products (PLP) is an international manufacturer and supplier of hardware and support systems for the communications and energy industries. Products include the COYOTE® Closure and GUY-GRIP® Dead-End used in the telecommunications, cable and energy industries. Manufacturing facilities are located worldwide in the USA, Canada, China, Brazil, Mexico, England, Spain, South Africa, Australia and Japan.