Trans-Am finale this weekend at Daytona 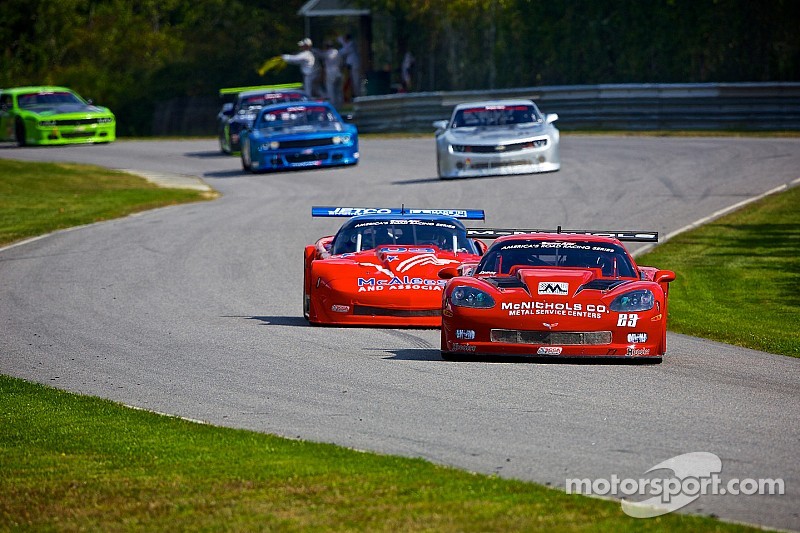 Round 11 of the 2014 season will decide some champions.

Defending TA2 Champion Cameron Lawrence and title contender Adam Andretti will garner much of the spotlight when the Trans Am Series takes to the track at Daytona International Speedway for the 2014 Trans Am Season Finale on November 15, 2014.

Heading into the event, Round 11 of the 2014 Trans Am Championship, Lawrence and the No. 1 CTEK/ NorthStar Miller Racing Dodge Challenger leads Andretti and the No. 44 Engineered Components Chevrolet Camaro by a single point—setting up one of the most contested championship finales in Trans Am history with all the makings of a series classic: Lawrence versus Andretti, Champion versus rookie, Dodge versus Chevrolet, Challenger versus Camaro, and one race with everything on the line.

Lawrence versus Andretti has been the prevailing theme of TA2 this year, despite strong efforts from the paddocks of Mike Cope Racing and Archer Racing. Between the Lawrence and Andretti, they have claimed victories at every race but one and started the race on pole on all but two events.

Lawrence started strong with five victories in the first six races, continuing his dominant form from 2013. However, the midseason switch to the Dodge platform has not been without its hiccups. Round 7 at the Mid-Ohio Sports Car Course saw Lawrence unable to qualify, but he still salvaged a tenth place finish in the 26-car TA2 entry. He followed it up with a fifth place finish at Brainerd International Raceway, and a victory at Lime Rock Park one round later—only to be setback by electrical issues at Virginia International Raceway (VIR).

While Andretti has been unable to match Lawrence’s sheer number of victories, he’s consistently landed on the podium. In all ten rounds of Trans Am this year, Andretti’s only miss came during the season opener at Sebring International Raceway where he finished a disappointing 12th. However, since then Andretti has been forced to settle for nothing less than third, including three victories, one of which came last round at VIR as Andretti completed a drive for the ages, rallying from a 15th place to first place giving him momentum heading to Daytona.

Still, Lawrence remains the Champion and will have the added benefit of racing in his home state on a track he knows well. Lawrence currently holds the track record for TA2, a record he set on his way to victory at Daytona during last year’s finale. Either way, history will be made and the Champion crowned at the conclusion of the 100-mile race.

Joining Lawrence and Andretti will be a 17-car TA2 field. The entry includes the third place battle between teammates Kevin Poitras, in the No. 73 PostPlastics Ford Mustang, and Ron Keith, in the No. 25 Offisite Image Management Ford Mustang. Both drivers run under the Mike Cope Racing Enterprises banner and are within five points of each other, with Poitras currently holding the lead and the coveted third position on the year-end podium.

Kendall and Dallenbach there

Also in attendance will be two former Champions and outright Trans Am legends in Tommy Kendall and Wally Dallenbach, Jr., both planning on participating full time come 2015. This will be Kendall’s fourth appearance on the year, now a part of the Miller Racing Dodge TA2 effort; however, Daytona will be Dallenbach’s first Trans Am appearance since 1991. Their talent alone should be enough to mix things up atop the podium.

The TA class will feature a 18-car field, headlined by the Tony Ave Racing duo of Doug Peterson and Paul Fix, who roll into Daytona with momentum in nearly every category. Peterson, in the No. 87 3Dimensional.com Chevrolet Corvette, clinched the 2014 Trans Am Championship last round at Virginia International Raceway (VIR) with a second place finish, his second Championship in a row. While Daytona stands as a glorified victory lap for Peterson, he will be eager to add to his trophy case and replicate his Daytona result from last year— a victory.

Peterson’s biggest threat for the top step might just be his own teammate, Paul Fix. Fix enters the year end arena after having dominated the past two rounds from behind the wheel of the No. 4 StopFlex Tony Ave Racing Chevrolet Corvette. At Lime Rock Park and at VIR, Fix led every session on his way to two consecutive victories.

Also featured will be Kerry Hitt, in the No. 19 Advanced Composite Products Inc. Chevrolet Corvette, John Baucom, in the No. 86 Baucom Motorsports/ Roadraceparts.com Ford Mustang, and Jim McAleese, in the No. 03 McAleese and Associates/ Jetco Chevrolet Corvette, all of whom are within reach of a top five placement on year and capable of shuffling positions come the conclusion of race.

Berkeley comes into the weekend fresh off back-to-back victories and with the points lead, but to secure the Championship he’ll have to fend of Betts and find his way amongst of the largest TA3 fields of the year with 14 members of the production based class present.

Berkeley and Betts have both had their share of success in 2014, with Berkeley claiming three victories in his three podium placements on the year. Betts has a single victory to his name, at Canadian Tire Motorsports Park, but has landed on the podium five times this year. Either way, one of them will depart Daytona a Champion.

In TA3’s American Muscle Group, Ernie Francis, Jr., has already captured the Championship, becoming the youngest Trans Am Champion ever. Now, in his home state of Florida, he and the No. 9 Breathless Performance Chevrolet Camaro will be faced with plenty of competition for yet another win in 2014.

Front-runners Dean Martin, Todd Napieralski and Chuck Cassaro will all be in attendance, plying their talent in a last gasp at Trans Am glory and final podium placements. Cassaro is currently second in the points but will have to hold off Napieralski, currently ten points off, to retain his position in the points.