The inaugural USAC Hawaiian Sprint Car Classic kicked off its doubleheader Friday night at Hawaii Motor Speedway, with yellow flags galore punctuating the evening from the first heat race on. As the bus transporting the visiting Southwest Sprint Car ...

The inaugural USAC Hawaiian Sprint Car Classic kicked off its doubleheader Friday night at Hawaii Motor Speedway, with yellow flags galore punctuating the evening from the first heat race on. As the bus transporting the visiting Southwest Sprint Car Series stars returned to Waikiki before sunrise, you could imagine the amount of grumbling taking place by a large number of individuals upset over how the night unfolded - despite being technically on vacation and not having just run a points race. A handful, though, were not complaining at all. 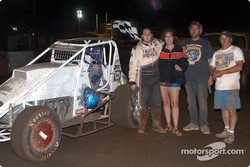 "It actually started out a little rough for us in the heat race," says Clark about how his maiden win unfolded. "A guy spun out in front of us and knocked out the front end, so we had to change that. In the main event, we just hung back and when some people crashed, we worked our way up; I think we had second pretty much held down. I think Rick was a little bit faster than us, but fortunately he got caught out by a lapped car, and we were there to take the win."

The feature saw a spectacular wreck in the opening laps when Ternora's brother Brandon flipped over in turn one, and as the crowd gasped, the fuel spilled onto his headers and ignited into a massive fireball. Ternora quickly scurried away unscathed, but the sprinter burned for minutes while safety crews struggled against the inferno.

The resulting red flag caused turmoil for many, with four drivers - including Boat and St. James - being penalized for assorted mechanical work. "Standard deal on this little racetrack," Boat summarizes. "We had a pileup and I cut a tire, and USAC rules are if you change a tire, you gotta go to the back. I almost parked it, because seeing what was going on all night, I didn't think there was any way I could get through that amount of cars with no damage. I figured I would save ten grand by parking it, when it pays a thousand or whatever to win. But I'm a racer - I can't do it, I never do that, and I didn't do that.

"I feel I was as fast as anybody on the racetrack but it's just so tough to pass. I could've gone up and started running into people, doing what drivers shouldn't do. Especially when the guy in front is a local - I didn't want to get a riot on my hands the first night. Everybody used their head there towards the end, and to come from 24th to fifth with my car sitting here on all four wheels - I'm pretty happy." 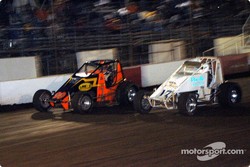 Shon Deskins and Hawaii sprinter Shawn Ternora.
Photo by Earl Ma.
Others did not hesitate about running into people, though. Local star Larry Peterson led handily after starting from pole, but points leader Dean Freitas, lobbying for the lead, nerfed Peterson on lap 13 and spun both out of contention. Ziehl, who qualified fastest in time trials in the 13.0 second range, then assumed the lead in pursuit of his fifth straight USAC win. Clark and others could not challenge him until his uncharacteristic spin.

"The track was really wet and tacky and hooking up really good at the beginning," the winner continues. "But then all of a sudden it turned hard and slick. It's hard to decide how to adjust your car for that, but I guess we adjusted the right way."

"Tonight was all attrition and survival," adds Martin. "It's tough when you get a dry racetrack like that. You gotta have a lot of patience, pick and choose your moments and bide your time. Our car really wasn't that great at all, but starting 15th and working our way up to third is pretty good. I'll settle for third. We got passed towards the end - I didn't want to see that happen, but considering everything we went through tonight is pretty good. We had a bad wreck in the heat race; that tore up a lot of stuff, so we had to fix that just to get ready for the main event."

After struggling with lighter machinery and too much horsepower for the 1/4 mile HMS dirt oval during Wednesday shakedowns, the USAC drivers reduced the performance gap considerably in the interim. Many like Clark "just tried to set the gear for the track and be easy on the throttle. That's about it - I try not to mash the gas too hard - take it easy and hope for the best."

Boat took steps further, using an variant of an old trick his father had taught him years ago. After scouring the hotel drugstore in vain Friday morning for a common household sponge to install under his throttle pedal, he improvised instead with cotton balls wrapped in duct tape. "I think I wore through a set though - I might have to go back to the store tomorrow. I do still need to find a sponge - the cotton balls aren't quite the right deal. I'll need a little more tuning on the sponge, I think. We're still only running half throttle throughout the race - it's a band-aid to keep you from having to worry about blowing the tires loose. It definitely helped, but it wasn't quite enough to get all the way up from last." 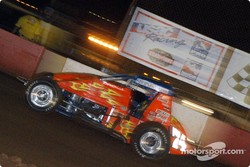 Mike Boat.
Photo by Earl Ma.
With the USAC drivers now adequately familiar with track conditions, they expect bigger and better things for Saturday's $20,000 finale (now extended from 30 to 40 laps). "We made a bunch of changes to the car tonight because I thought it was going to stay real heavy, but we should've known better," Martin says. "It went dry real quick, so tomorrow we'll be able to set it up a lot differently so I'll have a lot better race car. Tonight our car was not very good at all."

Heat victories went to Ziehl, Lane and Freitas (beating Boat, with the remainder of the field DNF's.

USAC's Beau Binder, who toppled his ride in turn one in the third heat, spent the rest of the night nursing sore ribs. Some tense moments also arose from the mini-modified feature when one driver appeared temporarily unconsious after going vertical and getting his fiberglass roof ripped off, but track workers quickly called off the ambulance.

Other than that, all that remains hurt are feelings. Some of these are bound to become even more sore tonight with the stakes being so high. But regardless of how Clark fares Saturday, he knows "this is my first win in a sprint car - I can't ask for nothing better than to come on vacation to Hawaii to win the first USAC race ever here, so it's been really fun and cool."

SWS: Commotion by the ocean