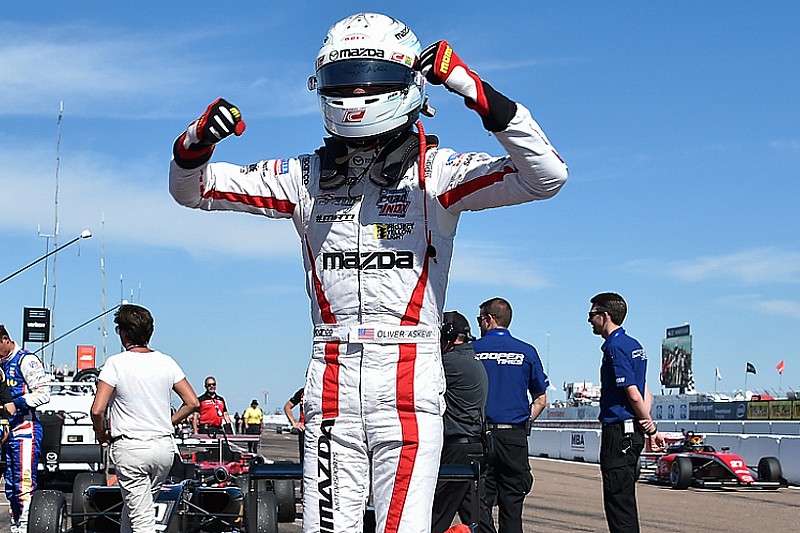 It appeared no one had the speed to stop Cape Motorsports’ Oliver Askew from winning his second USF2000 race of the weekend, and when his nearest pursuer made a slight mistake in pursuit, Askew was home free.

Two separate shunts on the opening lap – at Turns 3 and 8 – accounted for Calvin Ming, Andre Castro, Ricky Donison, Devin Wojcik, and Bayley Mickler, while the subsequent full-course caution accounted for more than 15 minutes of the 40-minute race.

Askew, who’d been perfect on the original start, made no mistake on the restart – but a slow exit to Turn 5 kept fellow front-row driver Kaylen Frederick of Team Pelfrey in the hunt for the lead.

Frederick clung on to within half a second of the Cape Motorsports machine until Lap 9, when he made an error that dropped him to 2.2sec behind the leader.

On Lap 13, with under six minutes to go, Sowery passed Enders, and Megennis followed suit the following lap and promptly set his fastest lap of the race.

Once Frederick had re-established his lead over Thompson following his earlier error, he still had nothing for Askew who kept pulling away, setting fastest laps and eventually winning by 3.8sec. Thompson finished 2.8sec further back but clung on to third, ahead of VeeKay, Sowery, Megennis and Enders.

Ayla Agren made it three Pelfrey cars in the top eight, with Moises de la Vara ninth in the second DeForce car.

Newman Wachs Racing’s Dakota Dickerson, who’d started sixth but been heavily delayed by an opening lap fracas, made a brilliant charge from 18th to finish 10th at the checkered flag.