La Rocca fist-pumping his 2012 season. (photo: Jose Rosado)Watkins Glen, NY – After momentarily getting shuffled back to fourth on an exciting opening lap, 2012 F2000 Champion Robert La Rocca picked off two cars on lap one and then passed Rob Nicholas for the lead on the next lap to open up a huge gap en route to a record-breaking 11th win of the season for HP-Tech Motorsport. It was the fourth weekend sweep of the year for the Venezuelan in the season finale doubleheader at Watkins Glen International, winning ahead of Wyatt Gooden and Nicholas. 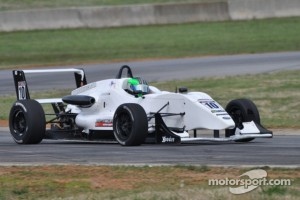 La Rocca, in the No. 10 Van Diemen, marked his 11th win in 14 races, breaking all existing records, and also taking 12 pole positions in 14 tries throughout the year. The second-year driver only had a single DNF on the Championship effort, and also spent time in Europe in F3 during the race season, where it is rumored he will race in 2013.

“I fell back at the start, but was able to get past two of them and then take the lead back on lap two,” said La Rocca, who ran the fastest lap of the race and will officially be crowned Champion at the Series awards ceremony at Watkins Glen. “I just did qualifying laps for the race, I couldn’t be happier with this season. I had a great car all year and can’t thank the team enough.”

Moreover, the race looked similar to other La Rocca victories, with him expertly managing the race pace, but with an even bigger gap to back to second on a beautiful fall day in New York.

A 2011 rookie campaign for La Rocca was contested with HP-Tech in a RFR chassis, highlighted by a handful of podiums but a long list of incidents while running at the front of the field. In 2012, a new chassis in the Van Diemen and a winter spent racing F3 in South America turned La Rocca’s speed into a lights-out season.

For Gooden, another podium with a second place day sealed his runner-up Championship run, also notching the Rookie of the Year honors for Quantum Racing Services in his first year out of the F1600 Formula F Championship Series. Gooden had two wins on the season. Those triumphs came at Lime Rock Park and Mid-Ohio.

“That was relatively uneventful despite shifting issues with the car,” said Gooden in a post-race interview. “I just cruised to the finish, we got Rookie of the Year and that is what we came here to do this year.”

Rob Nicholas won the Masters Class by rounding out the podium on his 2012 F2000 debut for K-Fast, and pushing his way by La Rocca and Gooden to lead the first lap in the No. 89 Van Diemen.

Completing the top five were Niki Coello, who took third place in the standings, and Zach Craigo, in a solid drive for Front Range Motorsports.

Kevin Kopp finished sixth, securing fourth in points in his debut season for the WISKO F2000 team, while Cesar Lapoint was seventh for HP-Tech, ahead of Kyle Connery, who started 15th, and Chris Livengood in a pair of RFR chassis. Sergio Pasian rounded out the top ten on his Series debut weekend.

Bringing out a full-course caution on the last lap was an incident involving Tom Fatur, Bill Jordan and Danyel Torres.

For the race, the No. 27 of Watkins Glen expert Craig Clawson improved an astounding 15 places to grab the CellMark Paper Hard Charger award.

Peter Gonzalez closed out the season-long CellMark Paper Hard Charger contest by improving 71 places over the course of the year in the No. 16 Radon chassis for GTP Motorsports, and will receive a cash prize at the Series awards.

Winning the Masters Class for the year was Tim Minor in the No. 88 Ski Motorsports Citation, despite not running at Watkins Glen.