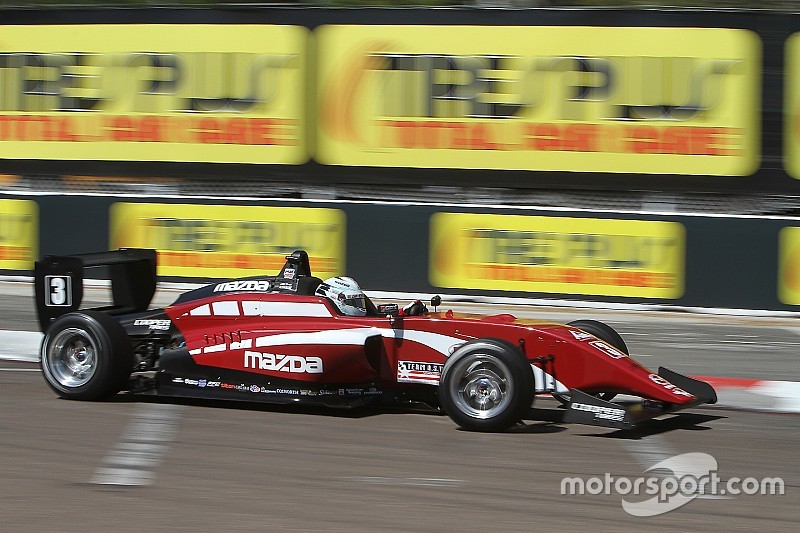 Polesitter Parker Thompson made just one obvious mistake all race, but it was enough for the Exclusive Autosport driver to hand the win to Cape Motorsports' newest USF2000 ace, Oliver Askew.

Enders passed Wojcik for eighth on Lap 4, but it wasn’t until Lap 6 that the chasing pack got a second bite at Thompson. That was because of a full-course yellow caused by a collision between Moises de la Vara of DEForce Racing and Andre Castro of Newman Wachs Racing. The contact ended Castro’s race and sent de la Vara to the pits for repairs.

At the end of Lap 10, the green flag flew once more, and Thompson protected the inside line from the chasing Askew, but it was too late for the grip available and he drifted wide. That allowed Askew into the lead with VeeKay second and Megennis third. Having picked up dirt on his tires, Thompson was also easy meat for Frederick who eased him out of fourth.

Dickerson also made a poor restart, losing a spot to Luke Gabin and dropping to seventh, while a lap later, Wojcik passed Enders for eighth.

Up front, Askew started showing his pace as soon as he had a clear track in front of him and by Lap 14 he had stretched his lead over VeeKay to 2sec, as Megennis started pressuring the Pabst racer hard for second place. Frederick, simultaneously, was closing in on teammate Megennis by setting fastest lap as he attempted to pull out a gap from the two Exclusive cars of Thompson and Gabin.

Megennis’ weekend then turned sour when, after drawing alongside VeeKay on the run to Turn 10, he ran out of room on the exit, clouted the wall with his right-rear, and ended his race on the spot.

There was no full-course caution, however, so Askew carefully paid out the line over the next two laps, allowing his lead to drop from 3.3sec to 1.2sec at the checkered flag, as VeeKay came home second, with Thompson third, ruing what might have been.

Gabin passed Frederick on the final lap to complete an Exclusive Autosport 3-4 in only the team’s second race at this level.

Behind Frederick, Dickerson took sixth ahead of Wojcik, Enders, Cameron Das in another Newman Wachs Racing entry, and Ming.