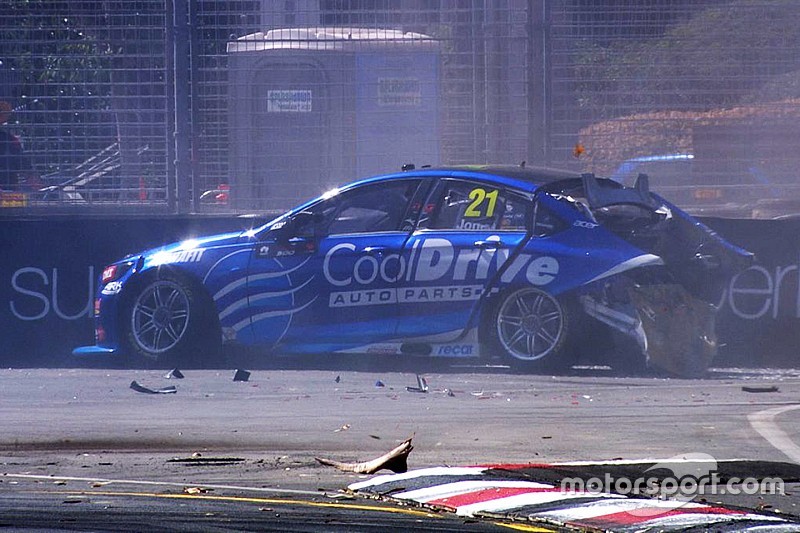 Scott McLaughlin topped a final Supercars practice session at the Adelaide 500 that was cut short by a huge crash for Macauley Jones.

Scott McLaughlin held off rival Shane van Gisbergen by 0.09s to top the session, however it was Jones that stole the show with a nasty shunt 30 seconds from the end.

The rookie suffered a front brake failure on the fast run down to Turn 9, his Brad Jones Racing Holden flung into the barriers.

Jones was unhurt in the impact, however the same can't be said for his Commodore, the BJR crew facing a race against time to get it back out this weekend.

“He’s had a brake failure. The front brakes initially started to work and then the pedal has gone to the floor,” said team owner, and Macauley's father, Brad Jones.

“He’s okay, but I can’t quite say the same thing about the car. There’s a lot of work to be done there to get it sorted out.

“Looking at how hard that thing hit, I’d be surprised if we can do anything with it, but we’ll see what happens when we get back.

“I’m pretty devastated for Macca. He’s done a fantastic job so far and hasn’t put a foot wrong and it’s not the way you’d want to start your first race.

“Fortunately there’s nothing wrong with him, he’s fine, it’s just a pity for the whole CoolDrive group really, they were going really great guns.”

With most teams focussing on long runs through the middle part of the 30-minute session, the next improvement at the top didn't come until there was 10 minutes left.

It was McLaughlin that made the gain, the reigning champ going quickest with a 1m20.424s.

Both parked up after that run, the Penske Ford driver set to take that slim advantage into this afternoon's Top 10 Shootout.

Scott Pye and Lee Holdsworth were sixth and seventh, James Courtney eighth, and Simona de Silvestro and Andre Heimgartner rounding out the Top 10.

Jamie Whincup was just 13th quickest, confirming afterwards that he didn't run a green tyre, while Fabian Coulthard was 14th in the Penske Mustang.