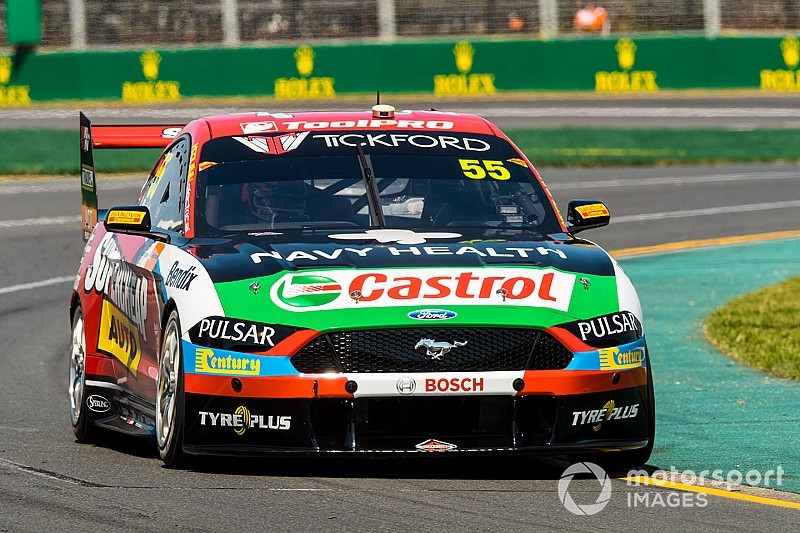 Scott McLaughlin and Chaz Mostert have secured the Supercars pole positions on offer for Races 3 and 4 at Albert Park.

Just like yesterday, McLaughlin made a blinding start to the pair of 10-minute sessions.

The reigning champion fired out a 1m53.999s on his first run, leaving him half a second clear of the rest of the field led by Cam Waters, the two Mustang drivers locking out the front row for Race 3.

Tim Slade was the best of the Holdens in third having been one of the few drivers to opt for two runs, his late improvement pushing teammate Nick Percat to the outside of the second row.

Shane van Gisbergen also opted for two runs after going just 13th quickest on his first, however a mistake at Turn 15 meant he was unable to improve on his second.

McLaughlin's run of poles was finally broken in the session to determine the Race 4 grid, Mostert choosing to run right at the end of the 10 minutes and storming to top spot with a 1m54.278s.

That dropped McLaughlin to second, just 0.08s separating the pair, while Whincup and Waters were third and fourth quickest respectively.

Van Gisbergen enjoyed a better showing in the second session, ending up fifth thanks to a second run, followed by Will Davison, Mark Winterbottom, Coulthard and Slade.

Lee Holdsworth rounded out the Top 10, putting all six Mustangs on the grid inside the first five rows of the grid.

"The first sector I lost a chunk of time there. I just went that little bit too deep and it just locked the front into Turn 3,” McLaughlin said of the second session.

“I tried to rescue it but then it carried too much speed through, so I was wide on exit.

“You lose a chunk and then, because it’s such a flowy track, you’re trying to get back into your rhythm the whole time.

“It’s the hardest qualifying of the year I feel, because it’s just one lap. It would have been cool to go four-up, but congrats to Chaz and his team.”

Mostert added: “We’re starting two races this weekend where the points don’t matter so much at the pointy end, but we’ve got some work to do in the longer races."

“The car has felt pretty good here through the weekend, it’s just a bad credit to me, I just haven’t been consistent, just making small little errors.

“When you have to put it all on the line in one lap it can really cost you in qualifying.

“Hopefully we can find a groove and come through in those longer races and capitalise on the ones we’re starting at the front.”