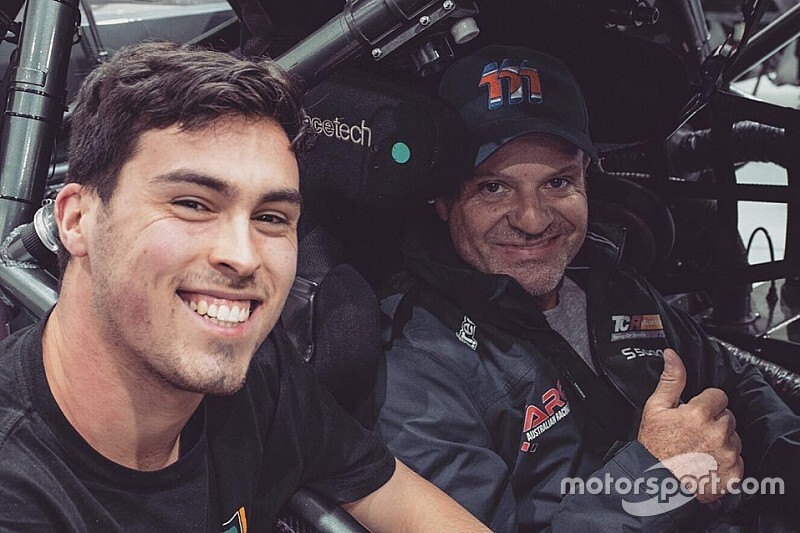 The Brazilian was the star signing for last weekend's inaugural S5000 round at Sandown, jetting into Melbourne on Tuesday morning before sampling the 560-horsepower open-wheeler for the first time at Phillip Island on the Wednesday.

Randle, who will team up with Lee Holdsworth in Tickford Mustang for next month's Bathurst 1000, then invited Barrichello for a tour of the team's Campbellfield factory on Saturday evening – an invitation that was eagerly accepted.

"[Thomas] asked if I'd like to see the factory, and I said 'why not?'," Barrichello told Motorsport.com.

"When you're back in Brazil, it's so far away to do those things. So I took my opportunity while I was here.

"The team has so many cars, it was unbelievable.

"You know these [Supercars] teams by their names and their drivers. I really appreciate what Supercars has done. People call me and say 'oh Rubens, you're racing the Brazilian Stock Cars – how does that compare to a V8?'

"They go straight to a V8. That means the racing is known worldwide."

The 11-time grand prix winner has a long-standing link to the Tickford squad, CEO Tim Edwards having worked on Barrichello's Jordan F1 car back in the early 1990s.

Edwards wasn't available for a reunion last weekend, however, due to motocross commitments with his two sons.

Barrichello has recently reaffirmed his long-held desire to take part in the Bathurst 1000, inspired by his close friend Max Wilson's seven-year stint as a Supercars driver.

He says if does commit to a Bathurst tilt, he wants to do it properly.

"I've said that it's on my bucket list to do Bathurst," he said.

"It's not that I want to come here and whatever, I want to do it properly."

While international drivers have traditionally struggled to get up to speed in a Supercar, particularly on the challenging Mount Panorama circuit, Barrichello is confident his Stock Car experience would ease the transition.

"I would say that, yes, because we've had some really good Australian drivers come and race in Brazil, like Mark Winterbottom," he said.

"It's comparable, for sure. I've never driven on the other side, with the gear shifter on the left, so that would be something to get used to."

Supercars pushes Gen3 rules back to 2022