Erebus Motorsport is facing a long night of repairs after its David Reynolds/Luke Youlden car was heavily crashed in second practice for the 2019 Bathurst 1000. 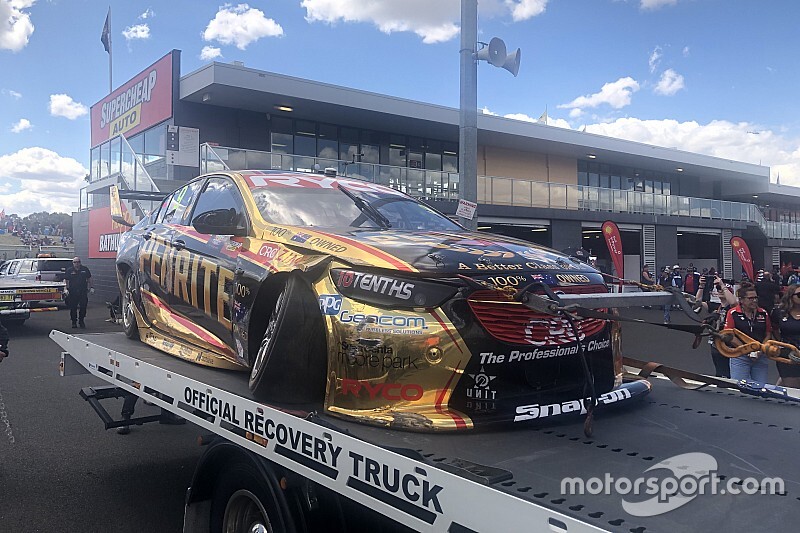 Youlden only got 20 minutes into the hour-long dedicated co-driver session when he ran wide on the way into the fast Sulman Park complex.

The Erebus Holden hit the wall with both its front and rear end on the right side, the high-speed impact causing significant damage.

Youlden was taken to the medical centre for concussion tests, but escaped any serious injury.

"Just lots of understeer into the grate and just didn’t make it out obviously, just wouldn’t turn for me,” explained Youlden.

“We were battling with it a lot and we made a change to try and combat it, but I obviously went in too deep.

"I just messed up.

“Very disappointed in myself. I regard myself as a fairly safe pair of hands. The pace is hot, we were trying to do our best to push the team forward.

“We believe we’ve got a pretty quick car, so I was expecting more grip to be honest.”

The car will almost certainly miss this afternoon's third and final Thursday practice session, putting the 2017 Great Race winners on the back foot.

Youlden wasn't the only driver to get caught out Sulman Park, Jake Kostecki clipping the wall at the same spot in his wildcard entry with 20 seconds of the session to go.

James Moffat topped the co-driver session with an impressive late lap, the Tickford Racing driver edging Alex Premat with a 2m05.661s right at the flag.

The gap to the Frenchman was just 0.02s.

Tony D'Alberto made it a Penske two-three, with Garth Tander leading the way for Triple Eight in fourth.

Will Brown provided the Erebus squad with some good news but putting the #99 in fifth.

Supercars rookie James Hinchcliffe was 24th out of the 25 cars that took part in the session, the IndyCar ace 2.5s off the ultimate pace.

The missing car in the second hit-out was the Macauley Jones/Dean Canto Brad Jones Racing entry, which is still undergoing repairs after Jones' practice one shunt.

Ash Walsh gave the BJR squad even more work to do in the second session, going off at the last corner and filling the #14 Holden with sand.