David Reynolds led an Erebus one-two in the final full practice session ahead of the Bathurst 1000, while Scott McLaughlin went within millimetres of hitting the wall. 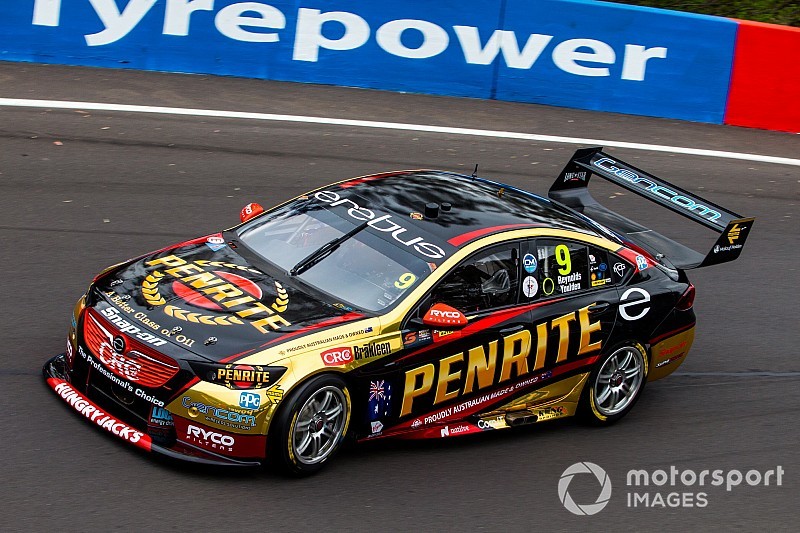 Nick Percat ended the hour-long session fourth quickest behind Waters, with Chaz Mostert the fastest of the drivers that won't take part in this evening's Top 10 Shootout with the fifth best time.

"I woke up this morning at like 10 to 4 doing qualifying laps in my head, so I’m a little bit tired," joked Reynolds.

“The tyres I was on then were from the start of the year, so they were probably a little bit harder, they weren’t quite there the whole lap.

“The time was still not too bad, but when I get a current batch of tyre I think I’ll go a bit faster.”

With the first proper sunny conditions of the weekend came lightning quick times straight out of the box, Tickford driver Waters setting a 2m04.849s on his first flyer before handing over to co-driver David Russell.

He was joined in the 'fours' by Reynolds, who fell 0.08s short of Waters' early benchmark with a first crack at a Shootout sim.

Twelve minutes in there was a brief red flag stoppage, thanks to Ash Walsh nosing his Brad Jones Racing Holden slowly into the wall at Forrest's Elbow.

Alex Premat went close to finding the wall himself shortly after the restart, the Frenchman spinning his Penske Ford at the last corner after riding up onto the exit kerb.

The next change at the top came 25 minutes in, Reynolds improving on his earlier lap go fastest with a 2m04.407s – what would ultimately prove to be the benchmark lap.

At the same time Richie Stanaway and Tim Blanchard staged a bizarre battle over the top of The Mountain, the Tickford driver laying into the back of Blanchard's Commodore as they came through the esses on the run to the Elbow.

Right as the session hit its midway point the #14 BJR entry found itself in the wars again, sparking a second stoppage. This time it was Tim Slade at the wheel, who ran wide at the first turn and ended up buried in the sand.

Once the session was restarted with 25 minutes to go, Anton De Pasquale was next of the Shootout contenders to do a single-lap sim, the rookie slotting into third with a 2m04.961s.

James Courtney had a go at a Shootout lap minutes later, the Walkinshaw driver falling short of a four with a 2m05.195s.

Improvements then came from De Pasquale, Percat, and Mostert to drop Courtney down to sixth by the end of the session.

Both Red Bull Holdens had a crack at a quali sim late in the session but neither got to the end cleanly.

For Shane van Gisbergen it was a scrappy final sector that left him on a 2m05.242s and down in seventh.

Jamie Whincup, meanwhile, ended up down the escape road at the last corner, which meant he finished the session down in 11th.

Scott McLaughlin fared even worse on his final run, almost scraping the wall on his out of The Cutting thanks to a huge dose of oversteer. He finished up 12th for the session, his best time more than two seconds slower than his record-smashing Shootout effort last year.

“I thought I was in to be honest. More arse than class saving that one,” he said.

"I just got caught up, I was trying to change the brake bias and on the bump I was just a bit wider than I wanted to be and it took off on me.

“Everyone says you have a moment once or twice all weekend, so hopefully that’s one of them.

“I wouldn’t say I was over-pushing, I just got caught up on that bump and if you’re off-line by a tyre width you’re gone.

“I was absolutely kissed there, so we’ll see how we go in the Shootout.”

Holdsworth on the Supercars driver market for 2019