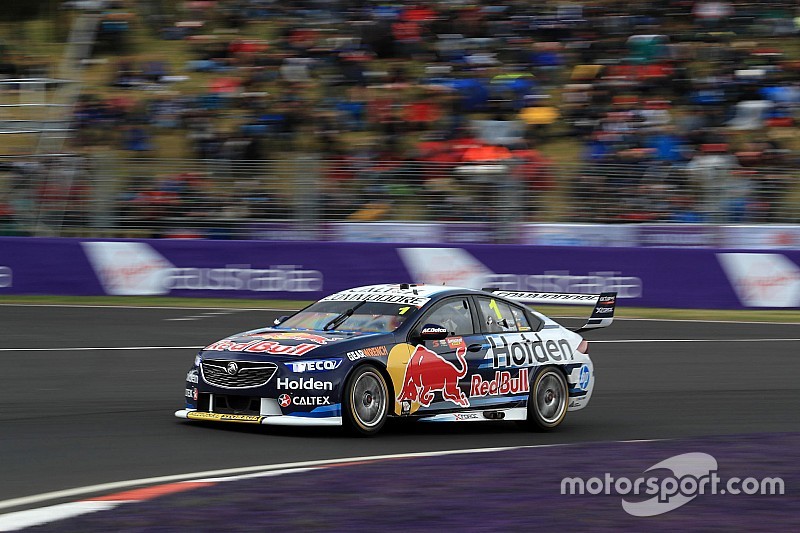 Jamie Whincup pipped David Reynolds by just over a tenth in what was a thrilling battle for provisional pole ahead of the Bathurst 1000.

The two Holden drivers were joined by Scott McLaughlin in what was a rollercoaster fight for top spot, Whincup ultimately earning the right to run last in tomorrow's Top 10 Shootout that will determine pole.

The primary drivers were greeted with a dry track for the first time all weekend at the start of the 40-minute session, Shane van Gisbergen and David Reynolds both running wide at The Chase as they found their feet in the improved conditions.

There were no such issues for McLaughlin, though, who slotted straight into top spot with a first run that consisted of a 2m05.391s followed immediately by a 2m05.324s.

Reynolds looked set to have a crack at P1 on his second run 15 minutes in, with a purple first sector and a PB in sector two. However a second mistake, this time at the final corner, sent him up the escape road and left him sitting 11th in the order.

Two minutes later James Courtney went fastest, the Walkinshaw Holden driver knocking McLaughlin off with a 2m05.103s. But it was only a matter of seconds before the time was bested, Jamie Whincup showing his hand with the first 'four' of the weekend, a 2m04.576s.

Reynolds finally got a clean lap together with a little over a quarter of an hour to go, the reigning Bathurst champion falling just 0.004s short of Whincup's benchmark.

Courtney hit back on his next run to pip Whincup by a tenth, McLaughlin then splitting the two Commodores with a time just 0.09s off Courtney's new P1 time.

With 10 minutes to go Whincup successfully made a play to return to the top, a 2m04.302s leaving him just under two tenths clear of Courtney.

Luckily for Whincup his improvement came just seconds for Jack Le Brocq hit the Turn 1 wall and brought out the red flag. Cam Waters, however, was less fortunate, falling just a few metres short of sneaking in a new personal best that included a purple middle sector.

The session resumed with nine minutes to go, but it wasn't until the final two minutes that the battle at the top of the times came to life.

McLaughlin was the first of the contenders to have a go, jumping to P1 with a 2m04.286. Within seconds he'd been bested, Whincup following the Penske Ford over the line with a 2m04.109s with just seconds of the session remaining,

The only remaining threat was Reynolds, who, in a thrilling finish, pipped McLaughlin but fell 0.15s short of Whincup.

“That was intense. I’ve done a lot of laps around this place, but never no dry practice before quali, new tyres and just hang it on the edge,” Whincup said.

“We improved the car [during the session], which is great, so I’m glad we went out and got the most out of it in the last one, otherwise we would have been pipped.

“That’s by far the quickest I’ve ever been at this place in a Supercar, so I couldn’t be happier.”

Van Gisbergen finished up fourth with Courtney slipping back to fifth.

Craig Lowndes had to improve after the restart to bank a Top 10 Shootout spot, as did Waters thanks to that poorly-timed red flag, that pair ending up sixth and seventh.

Nick Percat was eighth, Anton De Pasquale putting in the standout rookie performance to secure a Shootout spot at his first Bathurst 1000.

Garth Tander was the final driver to book a Shootout berth, Chaz Mostert the unlucky man on the bubble in 11th.

Surprisingly there wasn't a single Nissan in the Top 10, Andre Heimgartner the best of the Altimas in 13th ahead of teammate Rick Kelly.