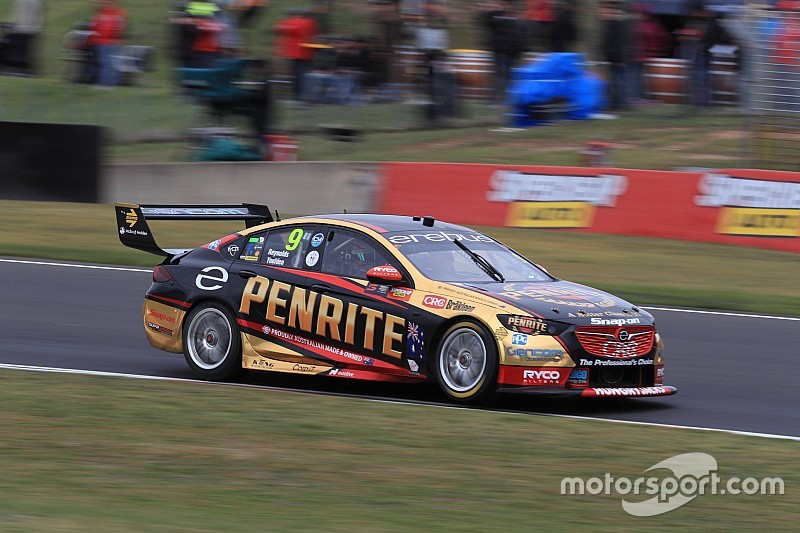 Luke Youlden topped the first dry practice session ahead of the Bathurst 1000, as Dean Canto became the first driver to be bitten by the Mount Panorama walls.

The hour-long session started in damp conditions, crews opting for wets for the first 17 minutes.

Best of the times on the grooved tyres was James Moffat, who signalled the crossover point to slicks with a 2m22.239s. That was quickly confirmed by Dale Wood, who, having switched to dry rubber, went fastest with a 2m21.644s.

Times quickly moved below the 2m20s mark for the first time all week, the likes of Steve Richards and Bryce Fullwood enjoying short stints on top as conditions continued to improve.

By midway through the session times were down to the 2m13s thanks to Dale Wood, who then made the next major step with a 2m11.669s on the 33-minute mark.

With two thirds of the session done times ventured into the single digits for the first time, Moffat with a 2m08.798s before Luke Youlden stormed to the top with a 2m07.906s.

The reigning Bathurst winner then put the icing on the cake with a 2m06.647, the quickest time of the session.

“It’s fair to say we had our struggles yesterday but I think we probably got a handle on that this morning in the wet running.

“The car is working really well, I probably didn’t expect that sort of margin, but the car was fast here last year and we’ve got a similar set-up.”

It was an eventful end to the session for Tickford's Dean Canto, who finished up both second quickest and as the first driver to find the wall.

The experienced co-driver had just jumped into second with a 2m07.075s before getting wide of the dry line at Forrest's Elbow and clattering into the wall.

"It was an interesting session. He was actually on a slowdown lap then, I’m not sure what went wrong and he ended up in the fence,” main driver Mark Winterbottom explained.

“The car looked like it had reasonable pace, now the guys have got to try and repair it and get us out for the next one.

“It’s not ideal, but you can’t blame him. It’s tricky conditions, we thought they’d all got through and then just as we were about to take the headset off we went in.

“It is what it is, we’ll fix it up, get his confidence up and go again later today.”

Jack Perkins was third quickest in the #25 Walkinshaw Holden, having survived a hair-raising moment of his own. The second-generation racer went very close to binning James Courtney's Commodore when he dropped a wheel on the outside of the The Chase.

That moment came a lap after Perkins set his best of a 2m07.177s, which left him one spot ahead of teammate Warren Luff.

“I hadn’t taken the chase flat so I thought I better give myself a good run-up there and just mistimed it a bit," said Perkins.

“Alan Gow (James Courtney’s manager) came to the window with some toilet paper thinking I’d need to clean up the situation, but it was a bit more under control from the inside.”

Alex Premat was best of the title-contending cars with the fifth-best time for DJR Team Penske, while Triple Eight's Paul Dumbrell and Earl Bamber were 10th and 11th respectively.

There was bad news for the third Triple Eight entry, though, with Richards ending up dead last after a persistent power steering problem cut his running short.

“We’re in the elimination phase. The boys have just changed the pressure relief valve in the pump,” explained main driver Craig Lowndes.

"They’ve run it up and it looks like we’ve regained pressure. We know we’re lower pressure in the power steering system than next door, so we know there’s an issue.

"We thought we had a line problem or something else, we’ve changed the rack and the pump, and we’ll see what happens in the next session now."