Jason Bright: "It was pretty satisfying to pop out in the top ten when we had been running 24th."

All seemed lost after just ten laps for Team BOC at Sydney Olympic Park today but Jason Bright made a remarkable recovery to finish fourth from almost dead last.

After qualifying fifth in the top ten shoot-out, Bright dropped to tenth off the start line and, when a safety car was called on lap 11, had to queue behind team-mate Fabian Coulthard in pit-lane. 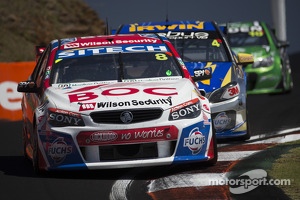 Running last of the un-lapped cars, Bright opted to pit again when another safety car was called a few laps later. The fuel-in-hand allowed him to complete an extra long stint and Bright made good use of the clear track to put in some quick times.

The strategy saw him move into ninth after all stops had been completed and he then passed Tony D'Alberto and Will Davison to run sixth, inheriting a further three places from Craig Lowndes, Mark Winterbottom and Coulthard, who all ran into trouble.

Qualifying for the last race of the season will begin tomorrow at 12.40

Jason Bright - Team BOC: "I'm pretty happy with fourth. It was looking like it was going to be a pretty bad day for a while there.

"I finally made a good start and everybody bombed me. If I didn't get out of everyone's way I would have had a crash. I was just in no man's land for the whole of the first lap.

"We were actually last at one stage mid-race. I could tell because I looked in my rear-view mirror and there was nothing! My pace behind other cars is woeful because I have no drive off the corners. My brakes are really strong but you can't use that strength behind other cars.

"I was pretty confident we would leap-frog the mid-pack with our strategy because we had fuel in hand and gained three or seconds from that in our stop. Then we were lapping in the high 1:29s when they were all battling. It was pretty satisfying to pop out in the top ten when we had been running 24th."