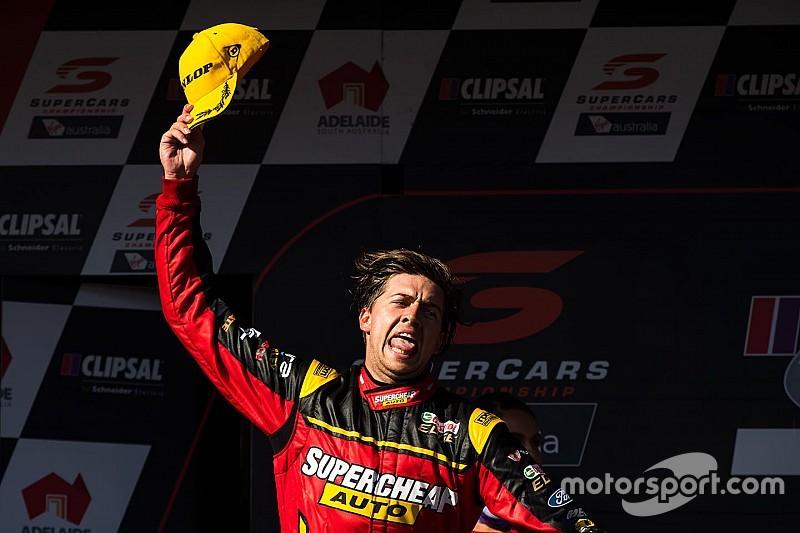 Prodrive Racing Australia driver Chaz Mostert says he’s surprised to have come out of the Clipsal 500 sitting fourth in the Supercars points.

Having never had much success at the Adelaide street circuit in the past, and coming off the back of a quiet end to the 2016 season, Mostert admitted that a third place on Sunday and fourth in the points was a better-than-expected result for the him and the PRA squad.

“My best ever result in championship points coming out of here was 22nd or 23rd, with generally pretty beaten up car. So to have two solid results, and to be on the podium [on Sunday], I’m stoked and pretty wowed.”

Mostert was particularly impressive in terms of pace during Sunday’s second leg of the Clipsal 500, showing enough car speed to run with double race winner Shane van Gisbergen during the first two stints of the race.

It was only during the back end of the third and final stint that van Gisbergen got away, with Mostert conceding that realistically PRA still has work to do to properly match Triple Eight and DJR Team Penske, but impressed with the turnaround after a relatively flat ’16 season.

“For us we burned our rears out about mid-stint,” said Mostert.

“We were trucking along alright a little bit off Shane but towards the end it blew out quite a bit.

“We’ll obviously go back through the data and see if we can make a little super package out of the two.

“We’ve made a lot of in-roads on the car. We’ve still got a way to go compared to [DJR Team Penske and Triple Eight], but this weekend, coming off where we were at the end of last year, I think we’ve come a long way.

“We’ve got a good base for the Australian Grand Prix races, and we’ll be trying some new stuff there and we’ll see if we can bridge that gap to the guys next to us.”

Mostert also opened up about the moment where van Gisbergen slotted in right in front of him as they cycled through there second stops, with the pair going close to making contact.

“The hardest thing is the closing speed. You’re on the straight, you’ve got a guy a gear or two lower than you when you get to Turn 1,” said Mostert.

“He went to the inside, so I thought I’d go to the outside – but then he turned back to the outside where I’d already committed to my braking. Obviously he braked early on cold tyres, and it was about a bee’s… between making pretty heavy contact.

“We were lucky to get through there. He’s obviously aggressive, that’s the way he likes to drive.

“At the end of the day we didn’t have the race pace to go with him to try and chase down Scotty [McLaughlin].”