Just a week after helping Pastor Maldonado score his maiden Formula 1 win, veteran F1 shoe Christian Klien has decided to chase a victory of his own – in one of the world’s most famed endurance events.

The former Red Bull F1 driver announced yesterday that he will partner with veteran Russell Ingall in a pair of V8 Supercar endurance races this year – including the storied Bathurst 1000. Klien will join Ingall in the Walkinshaw Racing Holden Commodore in September’s Sandown 500 as well as in October’s famed 1000-km race at Mount Panorama.

A veteran of 49 F1 starts, Klien got his first exposure to the V8 Supercars last year when he took place in the Surfers Paradise event won by former Champ Car titlist Sebastien Bourdais. Klien teamed with Paul Dumbrell in a Ford Falcon, finishing 15th in the first of the two races. 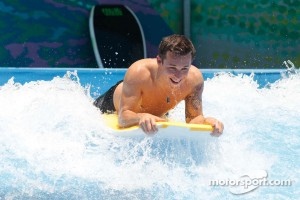 "I am very excited with this opportunity, to be joining the team and Russell Ingall for the biggest V8 Supercar races of the year is an honor," Klien said. "After the Gold Coast I was determined to come back and do more V8 races. It is a strong championship with extremely competitive racing, massive crowds and excellent TV coverage throughout the world. Mount Panorama is one of the world's great circuits and the Bathurst 1000 is world-famous - it's a must-do race in any racing driver's career.”

Klien has long been willing to step into a number of different machines in his pursuit of victory, having competed at the 24 Hours of Le Mans, the Petit Le Mans and the 12 Hours of Sebring and scoring a win with Peugeot at Spa in 2009.

Klien aided the shocking win for Williams and Maldonado last weekend at Catalunya, providing valuable information through his use of the team’s racing simulator.

"Since testing is banned during the season in Formula One all the top teams run simulator programs and I am working with Williams on theirs," said Klien. "The simulators allow them to test all season and on race weekends, so after Friday practice they get all the data back from the track and you test in the simulator. It's interesting work and like driving the real car."