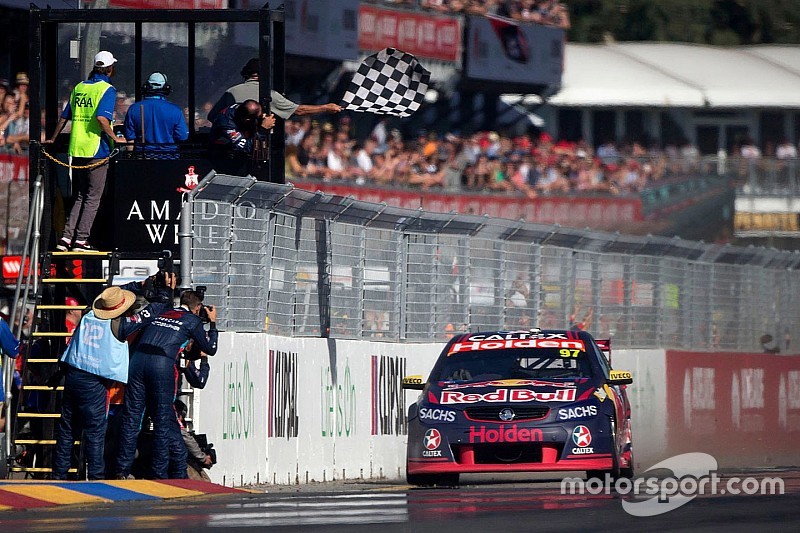 Shane van Gisbergen kicked off his Supercars title defence in perfect style, cruising to victory on the streets of Adelaide ahead of Fabian Coulthard and James Courtney.

The Triple Eight driver started from pole, but only led the first half of the first lap before being passed by Coulthard. The pair then ran nose-to-tail for the rest of the first stint, van Gisbergen taking back over the lead when Coulthard pitted on Lap 16.

Van Gisbergen made his own first stop on Lap 20, Triple Eight deciding for a longer fill. That dropped van Gisbergen to fourth in the order behind Coulthard, Courtney, and Jamie Whincup (who he quickly cleared), but meant he had a shorter stop second time around.

That proved decisive, van Gisbergen leapfrogging from third to a healthy lead after pitting again on Lap 43. From there he could simply cruise to a 14.7s win.

“I could have backed off, but I wanted to know how these tyres would last,” said van Gisbergen.

“What a great first day as Red Bull Holden Racing Team. It was an awesome race; very tough at the start, but we pushed on at the end. Hopefully we can do it again tomorrow.”

Coulthard came home second, but it wasn’t easy. Clipsal specialist Courtney shadowed the DJR Team Penske Ford right to the end, the pair separated by just 0.8s at the finish.

“I had James breathing down my neck the whole race,” said Coulthard. “The Triple Eight car is pretty fast, so we’ve got a bit of work to do. We’ve got a small mountain to climb, we’ll go at our own pace.”

“I was pressuring Fabs all the way to end, hoping he’s make a mistake,” added HSV Racing driver Courtney. “There was a couple of little ones, but nothing big enough for us to get through. But it’s a great start to the season.”

Cam Waters was next in line, collecting an impressive fourth place for Prodrive Racing, ahead of Rick Kelly’s Nissan.

Whincup finished the race sixth, a strategy gamble to pit on Lap 1 not paying off. The decision to make the early stop was in anticipation for a Safety Car that never came, and left the six-time champion out of sync until the end of the second stint.

Whincup’s race was further compromised by a tangle with Mark Winterbottom at the very top of the third stint. After a solid first two stints, Winterbottom emerged from his second stop running fourth.

However, just several corners after coming out of the pits he was turned around after contact with Whincup at Turn 5.

The resulting spin dropped the Prodrive Ford down to 15th, where he ultimately finished, while Whincup lost a spot to Craig Lowndes during the scuffle, a spot he claimed back with a couple of laps to go.

Hometown hero Nick Percat finished seventh, despite a mid-race bingle with Brad Jones Racing teammate Tim Slade, while Lowndes dropped to eighth in the closing stages of the race.

Like Winterbottom, Scott McLaughlin was another front-runner to miss out on a result. The Kiwi looked in contention in the early stages of the race, but was ultimately undone by a pitlane penalty.

Sitting fifth, right behind the lead four, after the first round of stops shook out, he was busted for weaving after the Safety Car lights had gone out on a Lap 23 restart, the subsequent drive-through dropping him back to 24th. He could only recover to 17th.

Further back in the field, Simona de Silvestro finished her first race as a full-time Supercars driver in 20th spot. She had a mostly clean race, her only issue being some dislodged bodywork after nudging the barriers with a handful of laps to go.

“The pace could be a little bit better, but the car was really good,” she said. “For a first race, we’ll take it. We finished, and learnt a lot during the race. We’ll do better tomorrow.”

Will Davison’s race only lasted one lap, the Tekno driver becoming the first to be properly bitten by Turn 8 this weekend after being shoved wide by James Moffat and Todd Kelly.

“I didn’t know someone was next to Todd,” he said. “I was about to back out and give him right of way into Turn 8, and the next thing his car has come across the front of me. I noticed he had someone squeezing him on the inside of him.”