Starting 13th on the grid, Nick Percat moved up one place on the opening lap and maintained that position until an unscheduled pitstop on lap 11 to remove an underbody panel. Percat then returned to the pits on lap 21 and dropped to 28th.

On lap 35 the safety car appeared after Ash Walsh had a big crash in the high-speed esses at the end of the back straight. Although the car was badly damaged, Walsh was okay. 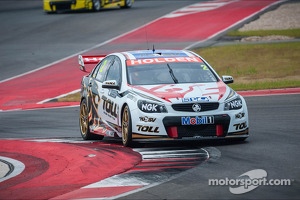 By lap 58 Percat had worked his way forward to 10th but the following lap ran wide at the end of the back straight dropping back to 12th.

He then pitted on lap 66 in 13th place under a safety car period and handed over to Garth Tander who rejoined 23rd.

On lap 85 Tander had moved up to third behind the Mercedes duo of Tim Slade and Lee Holdsworth, the first time the German machines had ever run one-two in a V8 Supercar race. Two laps later Tander ran wide at turn nine and dropped back to seventh and shortly after clashed with David Wall at the same corner and immediately pitted for repairs. He then rejoined on lap 96 in 25th position.

Tander pitted again on lap 135 from 23rd and rejoined three laps later and after an eventful 500 kilometres, crossed the line to finish 22nd.

Jamie Whincup won the race, in a remarkable recovery drive from 25th after a pitlane penalty followed by teammate Craig Lowndes with Will Davison third.

Nick Percat said: "It was pretty much all over on the first lap as Tony D'Alberto ran into the back of me and then we had to stop to remove the damaged bodywork. I had to attack my pitlane entry pretty hard as I was in the middle of an intense battle, and as a result copped a pitlane speeding penalty. From there it wasn't to bad, but towards the end we had a couple of mechanical issues which put us out of contention".