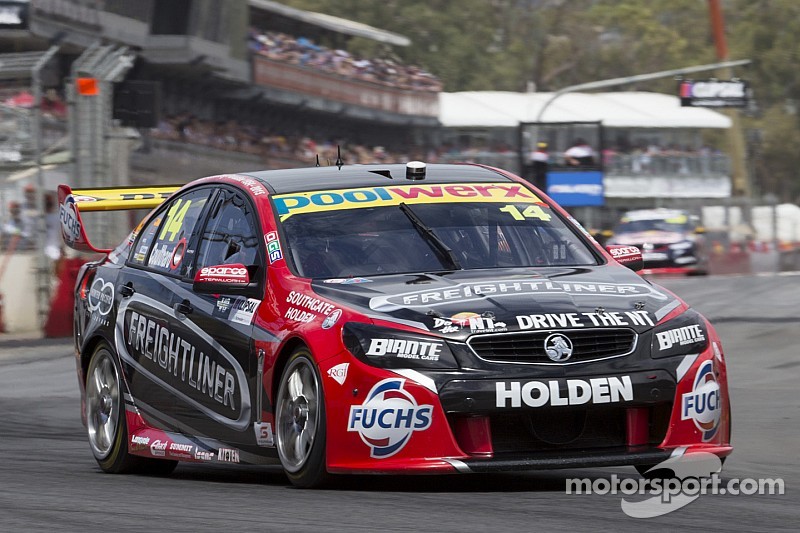 Proud Kiwi Fabian Coulthard admitted to an in-car fist pump when New Zealand hit the winning runs in Dunedin before channelling the victory for his sixth V8 Supercar win.

Coulthard revealed some of his Kiwi ‘bros’ were keeping him up to date with the thriller in Dunedin while he chased six-time V8 Supercars Champion Jamie Whincup at the Clipsal 500 Adelaide.

Within moments of Kane Williamson hitting the winning runs at Eden Park, Coulthard pounced on then leader Whincup, who suffered a flat tyre he claimed as the result of on-track debris.

From that moment Coulthard ran away with it, registering Brad Jones Racing’s 100th victory in the sport. He beat home James Courtney and Craig Lowndes.

“Of course I was,” Coulthard said when asked if he was aware of the Black Caps win.

Racing is all about that sometimes, when you need to be there to pick up the pieces.

“My kiwi fellas winning the cricket, outstanding. It’s pretty cool that a Kiwi wins here, and we beat Australia.

“It’s been a long time since I could say I’ve won a race. It’s awesome to get BJR’s first front row qualifying yesterday and to get their first race win at Clipsal is a fantastic achievement.

“To say you have won on the streets of Adelaide is pretty cool feeling.”

Whincup had comfortably won the first of the two races and took over the lead in the second when a desperately unlucky Scott McLaughlin was given a ten second penalty for a jump start.

But Whincup showed he was fallible when he suffered his own setback which handed Coulthard the race two lead, hanging on despite a safety car which brought him back to the field.

“It was unlucky to Jamie, obviously he was pretty quick. We were there, or thereabouts, but it would have taken a fair bit to get past so we needed something like that to happen,” Coulthard said.

“Racing is all about that sometimes, when you need to be there to pick up the pieces.”

It was also a special moment for Coulthard as he dedicated the victory to the larger than life figure Geoff Paradise who had been instrumental in his team's new Freightliner sponsorship. Paradise was tragically killed in a car accident last week.

Whincup was twice dosed with a touch of luck, on both occasions at the cost of young McLaughlin, just as it appeared the bright blue Volvo was the car to beat.

He admitted ignoring team instructions to stay out for an extra lap with his tyre deflating, going perilously close to smashing into the turn eight wall before pitting to change the tyre.

“I said ‘hang on Lizzy, we’re going in here’ but somehow we got round and the car’s still straight. All in all, the car was quick today which is the main thing, so we’re looking forward to tomorrow.”

McLaughlin suffered catastrophic engine damage in the warm-up lap in the first of two races; then disastrously copped a 10 second penalty for jumping the start in the second as he was pulling away from second-placed Whincup.

The 21-year-old was then handed a further 10 second penalty for taking his original punishment during a safety car period.

“What can you say – that’s the rules," McLaughlin said. "But I think it’s fair and square we stopped and did our penalty. We did it. I took the penalty and ... worked my way forward. But that’s alright, that’s the rules."

Marcos Ambrose, returning from NASCAR for DJR Team Penske, raced forward to finish 16th in both races, after starting from 24th position on the grid.