Coulthard to start the Sandown 500 from 15th

Fabian Coulthard: It's going to be a long day

Starting the Sandown 500 from 15th is going to make for hard work at Lockwood Racing tomorrow, especially if tonight's endeavours do not present any solutions. 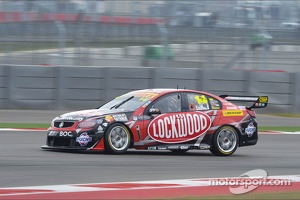 The crew is currently sifting through data after Fabian Coulthard reported uncharacteristic traits in the car, which he qualified 13th this morning.

Luke Youlden then took the reins in the first of two 20-lap qualification races. He made up two places when stable-mate Andrew Jones and Craig Baird had a coming together in front of him, which he safely navigated to finish tenth. The team drama was reversed in the second qualification race, however, when Fabian lost out in a battle with Alex Premat, letting team-mate Jason Bright through.

Coulthard and Youlden have one final warm-up tomorrow at 11.05 to fix their problems before gridding up 15th for the Sandown 500 at 13.35.

Fabian Coulthard: (Lockwood Racing): "I ran wide at Dandenong Road Corner and that gave Premat the chance to come around the outside. We went side-by-side through the last two corners and into Turn One. I probably braked too deep and ran out of black stuff.

"Our cars aren't how they usually are. They lack grip, struggled for drive and don't handle the curbs well. We're trying plenty of things but they're obviously not the right ones. We need to re-evaluate and start again but it's a long race and we have to finish. Points are very valuable at this time of year. It's going to be a long day tomorrow."

Luke Youlden (Lockwood Racing Co-Driver): "We were just lacking drive onto the two long straights. The car's quite good everywhere else but we can't exploit where we are quick compared to everyone else because we struggled on the two most important corners.

"I could see Jonesy was struggling and Baird was getting quite racey with him. I could see trouble coming a couple of corners away and I just waited for it to happen. We'd talked about it before the race; not being the aggressor but being opportunistic and being in the right place at the right time."