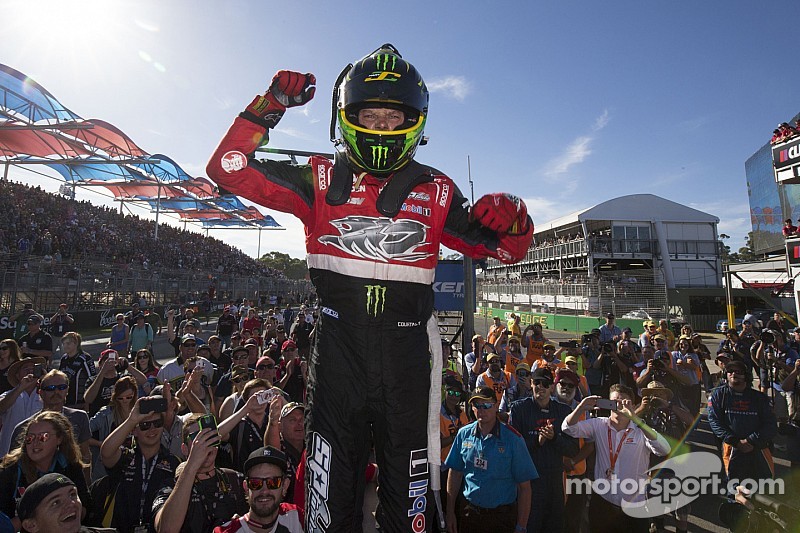 After a battle which lasted for the final 20-laps of Race 3, Holden Racing Team driver, James Courtney, held off a major offensive from Shane van Gisbergen for the win at the final race of the weekend. With the victory, Courtney now sits amongst drivers such as Mark Skaife, Jamie Whincup and Marcos Ambrose as he becomes one of the few drivers to win back-to-back Clipsal 500 victories. Additionally, Courtney also sets himself up with an early championship lead.

Starting on pole, Courtney got off to an excellent start and developed an early lead on the rest of the field. Through various pit strategies which involved multiple safety cars, the HRT driver drove on and would be accompanied on the podium by his teammate, Garth Tander, who finished in third after being relegated to the seventh starting position due to a timing error which originally posted him in ninth.

As the race began, the Race 2 winner, Fabian Coulthard, got off to a slow start and got shuffled back to fourth by the end of the first turn.  By the end of the race, however, Coulthard held on to finish in sixth.

The first safety car was brought out by the newest member of Erebus Motorsports, Ash Walsh, when his Mercedes went belly-up and soon parked off the racing line. This only added to the list of woes which Erebus has been experiencing this weekend.

Walsh’s teammate, Will Davison, seemed gutted as he sat in the pit-lane garage as his crew worked on the car for the third day in a row. Although Davison was eventually able to get his Mercedes out on track, Walsh was forced to settle for last place with a DNF.

Once the first safety car cleared, it was soon brought back out again when Lee Holdsworth went wide and made hard contact with the wall at Turn 8. To his credit, however, Holdsworth was able to bring his Holden Commodore back to the pits despite severe steering damage.

With Ambrose starting inside the top-ten, he and the DJR/Team Penske outfit seemed to be having the race they had been waiting for. Posting very impressive times for someone who’s been away from the game for nine-years, Ambrose went on to finish the race in 12th position. Being that there goal was to be mid-pack, one could argue that they’re off to a great start and will be a force to be reckoned with sooner rather than later.

As the race was coming to a close, a last lap incident proved to be costly for Prodrive Racing Australia driver and defending Bathurst champion, Chaz Mostert. As the Ford driver attempted to pass the six-time champion, Jamie Whincup, on the outside, Whincup explained that oil on the track caused Mostert to slide into him.

A weekend to forget for Scotty

It was more heartbreak for Scott McLaughlin which compounded the issues he’s had this weekend. As the race was about halfway completed, it appeared that the alternator in his Volvo S60 began to fail which eventually led to his battery failing. After a pit-stop to change the battery, McLaughlin eventually found himself down in the order and finishing in 18th position.

The teams and drivers will now have a couple of weeks to regroup and process all of the data gathered from the initial race weekend before they head off to the 2015 Formula 1 Rolex Australian Grand Prix in Melbourne which is scheduled for March 12-15.