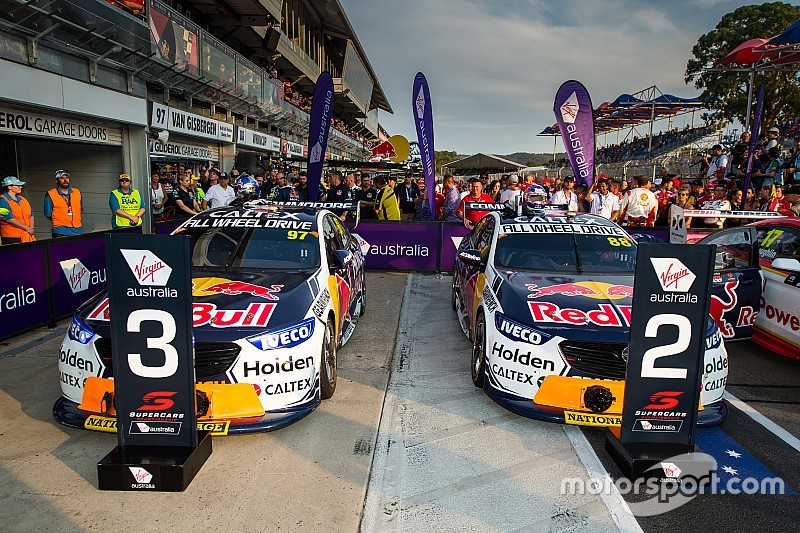 Triple Eight boss Roland Dane believes his Holdens only scored podium finishes in Adelaide due to problems for some of the Mustang-shod drivers.

In total there were four Mustangs in the Top 10 on Saturday and three on Sunday, which included Cam Waters making it a Mustang one-two by holding off T8 driver Shane van Gisbergen.

Dane, however, reckons Ford's new racer could have inflicted even more damage across the Adelaide weekend.

He says the fact that Jamie Whincup and van Gisbergen finished second and third on Saturday, and the Kiwi backed that up with another third on Sunday, was due to Mustang drivers 'treading on their feet'.

"It's obviously an effective car; we knew it would be, and we need to see what we've got to do to beat it," said Dane.

"The first thing is we get an understanding of what the car's all about etcetera, we've got a bit more of that now. And then we'll have to see what we can actually do ourselves to accomplish that.

"I mean, to be honest the only reason that we've got the podiums – which I'm very happy with, and worked hard for, as hard as we've ever worked – is because some of the Mustangs were busy treading on their feet, in various ways, during the weekend.

"Some time they're all going to get it right, and we'll have to see what that looks like."

There were a number of problems for Mustang drivers in the South Australian capital, starting with Waters being taken out of contention for a Saturday podium by a cool suit failure in the sweltering 40-degree heat.

Lee Holdsworth hit the wall in both races, while Chaz Mostert ran wide twice while trying to pass van Gisbergen on Sunday before clashing with Rick Kelly in pitlane.

Coulthard, meanwhile, jumped the start on Saturday and was penalised, copped another penalty for his crew working on his car ahead of Sunday's Shootout and was dumped to 10th on the grid, before a third penalty in the race for contact with Garry Jacobson.

While hinting at the potential for Mustang dominance, Dane is yet to formally make any parity concerns public.

Instead he says it's a wait-and-see situation, although he did revisit last year's controversy regarding the ZB Commodore's composite panels.

"[The Ford teams] seemed to get pretty concerned last year, so we'll have to see," he said.

"I'm not going pass judgment yet. We'll look at all the data, see what's going on."

The upcoming rounds may not provide the clearest picture, however, with Albert Park tipped to suit the Mustang thanks to its high-speed nature, while Symmons Plains in Tasmania is traditionally a happy hunting ground for Triple Eight.

"Jamie won [at Albert Park] last year, but yeah, I suspect it could play into their hands, but we'll wait and see," said Dane.

"Tassie an outlier, that's a different. I'm not saying that they won't dominate there, they might, or be very competitive or whatever – but it's a different proposition.

"And it's a very different set-up than any other circuit."