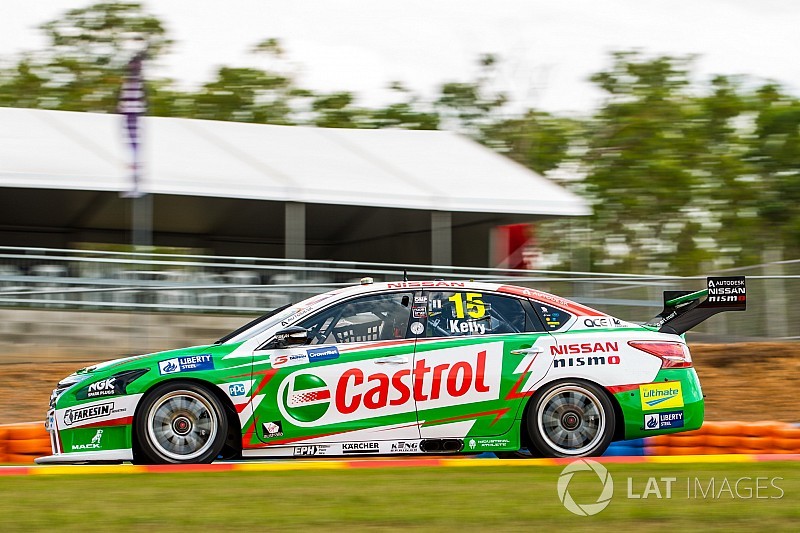 Rick Kelly will start today's Supercars race from pole position, after making up five spots to go fastest in the Top 10 Shootout.

Having been just sixth quickest in regular qualifying the Nissan Motorsport driver made huge gains in the single-lap Shootout, his 1m05.824s good enough to beat provisional polesitter Scott McLaughlin to pole by 0.05s.

"This one is completely unexpected," said Kelly. "I thought we did a clean lap and we might have been in the top four, but to get pole is massive.

"I didn't think it was possible today. We were so strong Friday, a bit weaker yesterday, and today in qualifying we were struggling to be sixth. Two one-hundredths and we would have been 12th, and we're standing here with a pole cheque. Yeah, I'm shocked."

For the second day running McLaughlin will start from the outside of the front row, running a bit too deep into Turn 1 proving crucial for the DJR Team Penske driver.

"It's amazing; you're looking for that half a tenth," said McLaughlin.

"Sometime s you get it right, sometimes you get it wrong. In qualifying I got it really good, but in the Shootout not so much."

Jamie Whincup was another big mover, jumping four spots from his qualifying position to go third quickest in the Shootout. The biggest mover, however, was David Reynolds, who went from 10th to fourth.

Nick Percat finished where he started – fifth – while Garth Tander made a couple of spots and will start sixth.

Michael Caruso was the last of the drivers to improve on his qualifying position with seventh, while Fabian Coulthard dumped four spots with eighth in the Shootout.

The final two were James Courtney and Anton De Pasquale, who both dropped seven spots after going second and third fastest respectively in regular qualifying.

For Courtney the issue was not having any green tyres left, while rookie De Pasquale – partaking in his first Shootout – locked a brake into Turn 1.

"I went a little bit deep into Turn 1, pinched a front wheel and ran wide," explained the Erebus driver.

"I lost pretty much all of the time there. The second half of the lap was okay, but once you're off line for the first corner, you sort of lose the next corner. I didn't want to under-drive the car, so I tried to do what I did in qualifying.

"It's alright, it was my first go at it. The car is still quick. We'll push on in the race."