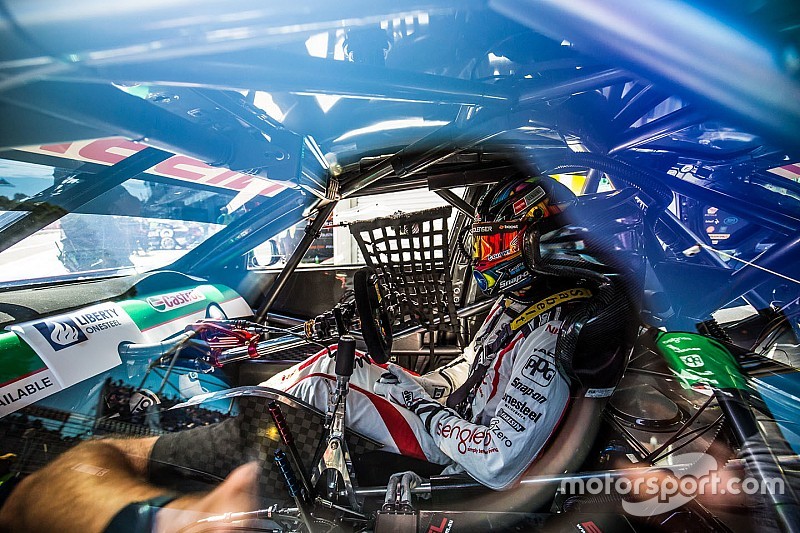 The Nissan Motorsport driver was at or near the top for the majority of the session, setting the first of the representative times with a 1m06.844s to go fastest inside the first 10 minutes.

Scott McLaughlin then spent a lengthy stint on top, having gone quickest with a 1m06.809s at the 11-minute mark, before Kelly fired back with his session-topping 1m06.506s with three minutes to go.

"You're not too worried about where you are at the end of Practice 1 – you don't know what tyres everyone is on – but the session itself for us was really strong," said Kelly.

"We tried a lot of stuff there and the car didn't fall away. And we found a couple of things that we used to our advantage at the end of the session for that time.

"It's a fantastic start. The car feels really solid, it gives me confidence to drive it nice and straight. Hopefully we can keep that for the weekend."

Jamie Whincup ended up second fastest, 0.11s behind Kelly, having made gains on his final run with two minutes to go. Michael Caruso improved even later than Whincup, capping off an excellent session for Nissan by going third quickest with just seconds left to run.

David Reynolds was fourth fastest, having been momentarily quickest with three minutes to go before Kelly took over at the top, while Shane van Gisbergen was fifth after making big gains at the end of the session and then promptly sliding off at Turn 1 right after he'd set his time.

McLaughlin failed to improve on his earlier effort and slipped back to sixth, ahead of Craig Lowndes and Tim Slade.

Will Davison was ninth quickest, and the only Tickford-built Ford in the Top 10. The actual Tickford Racing cars were nowhere near the pace, Chaz Mostert the best in 14th, while Richie Stanaway was 17th, Mark Winterbottom 18th, and Cam Waters 19th.