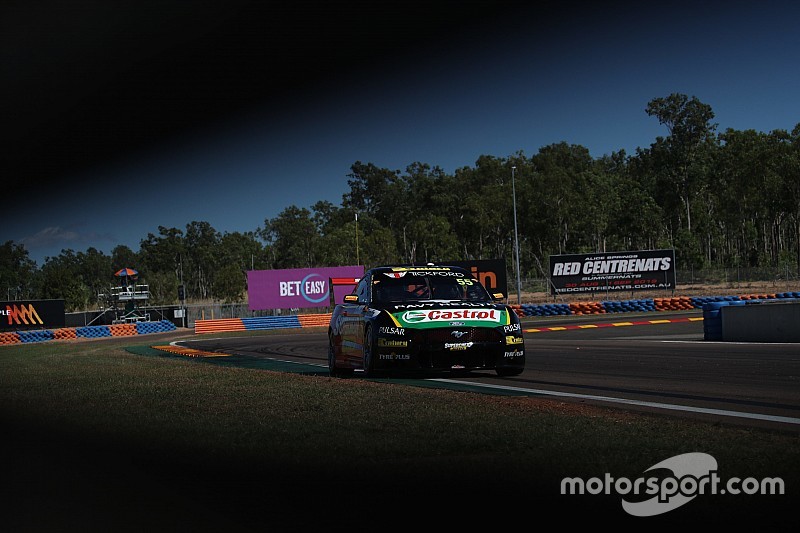 Times started out in the low 1m07s, Reynolds leading the way after the first runs with a 1m07.055s.

On the 10-minute mark Scott McLaughlin moved to within four-hundredths of Reynolds' time, before closing the gap down to two-hundredths a lap later.

Reynolds swiftly remerged and lowered his own benchmark, becoming the first man into the sixes with a 1m06.785s on 15 minutes.

With a little under 10 minutes to go Anton De Pasquale made it an Erebus one-two, moving into second with a 1m06.966s.

The green tyre runs started with three minutes to go, the likes of Scott Pye and Simona de Silvestro quickly moving into the top three.

Mostert then went fastest a minute from the end with a 1m06.721s, putting a Mustang on top for the first time all session with a second fresh tyre run.

"These practices are hard to read as to where you exactly are," said the Tickford driver.

"We've got some work to do on the car. We got a read on the balance, we struggled a bit out there. But overall it wasn't a bad hit-out.

"I think the same guys will still be the guys to beat. We've got a bit of work to do."

Reynolds ended up second, as a late improvement from Shane van Gisbergen left the Red Bull Holden driver in third.

Lee Holdsworth was another late improver to slot into fourth, as Pye and de Silvestro were shuffled back to fifth and six respectively.

De Pasquale ended up back in seventh, followed by Will Davison, Todd Hazelwood and Cam Waters.

Scott McLaughlin finished down in 11th, after initially focussing on race runs and then going too deep into Turn 1 late in the session.

“We did a race run and I unfortunately had a lock-up into Turn 1 there,” he said.

“We made a little change in the front that will probably affect my braking. So we’ll go back there and find it a different way.”

Lotti: TCR not competing with Supercars