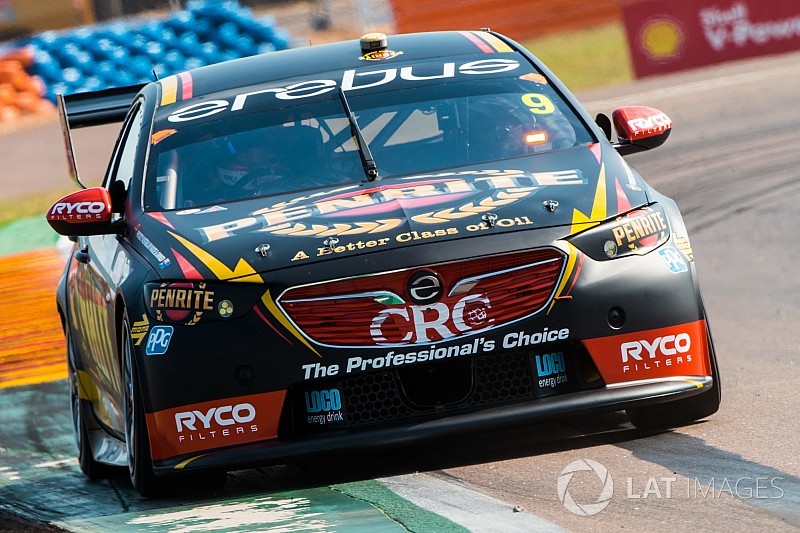 It was a hectic start to the 15-minute session, as crews looked to take advantage of the Michelin rubber left over from the preceding Carrera Cup race, as well as beat the constantly rising temperatures.

That meant the best of the times were likely to come on the first run, Scott McLaughlin proving that point perfectly with a 1m05.894s – the first 1m05s lap of the weekend – on his first run.

While it looked like a typical McLaughlin killer blow, David Reynolds had other ideas. Seconds after McLaughlin crossed the line, the Erebus driver took over at the top with a 1m05.849s.

As quickly as it started, the battle for pole was over, both Reynolds and McLaughlin out of their respective cars not long after the half-way point in the session with the front row sewn up.

"We know when the Michelin rubber is down, you've got one lap to do it and it's toast after that," said Reynolds, the pole his first since 2015.

"I just threw everything I had at it, and it stuck. It means a lot to me; usually [Scott] is the qualifying king, so I couldn't be happier. I was crying a little but in the car, because we haven't had a pole with this team. It's unbelievable."

"I just missed a little bit on my lap," added McLaughlin. "I was probably being a bit too safe trying to get that first lap in, and paid the price."

The real shock of the session was Reynolds' teammate Anton De Pasquale, the rookie showing few signs of it being his first trip to the Darwin circuit by qualifying third.

"It's good. It's my best qualifying, but Dave still beat me," he said. "It's very intense, that first lap, you know that's when it's going to count. First time here, but I'm really enjoying the track. Hopefully I still enjoy it after the race."

De Pasquale's effort dropped Rick Kelly back to fourth, while the Red Bull Holden pair of Shane van Gisbergen and Jamie Whincup couldn't do any better than locking out the third row.

Andre Heimgartner and Michael Caruso made it three Nissans in the Top 10 with seventh and ninth respectively, split by Scott Pye in the Walkinshaw Holden.

Will Davison was once again the best of the Tickford-built Fords in the 23Red entry, the factory cars down in 16th (Mark Winterbottom), 17th (Chaz Mostert), 18th (Cam Waters) and 22nd (Richie Stanaway).

Fabian Coulthard was another surprising omission from the Top 10, finishing 13 spots behind his DJR Team Penske teammate.

Having crashed heavily in practice, wildcard entrant Macauley Jones managed to not only get out for qualifying, but out-pace both Jack Le Brocq and Todd Hazelwood.