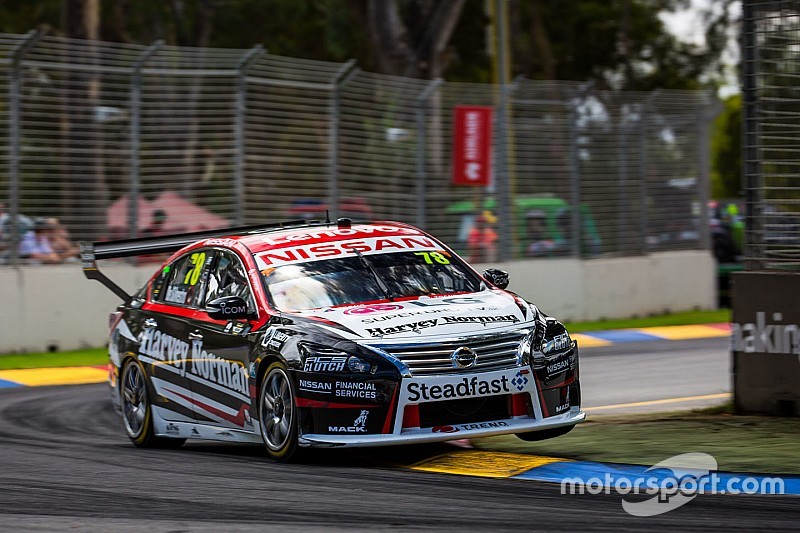 Simona de Silvestro and Tim Blanchard have offered differing accounts of the Turn 8 clash that wiped Blanchard out of the first Adelaide 500 race.

The pair got together on Lap 59 of today's 250-kilometre race on the Adelaide streets, scrapping over position on the run into the notorious Turn 8 resulting in Blanchard slapping the wall and badly damaging his Brad Jones Racing Holden.

At the heart of the contention over who is at fault is Turn 8's 150-metre rule, a mandate that whoever is ahead on approach to the fast right-hander has the right of way to avoid side-by-side racing through there.

According to Blanchard, he was ahead – a view not shared by Nissan star de Silvestro.

“We were side-by-side at the 150-metre board and it’s pretty clear that whoever is in front at the 150 board has right of way," said Blanchard.

“It felt pretty clear-cut. I just turned in and she tagged the rear of my car and I was a passenger fromthere on.

“Without the contact I was making the corner easily. I was on the marbles so was very conservative.

“She turned in, tagged the rear quarter of my car and caused a fairly big crash for us.

“It was a very big hit and a lot of damage, which is pretty disappointing.

“It was the third time I’d gone through that part of the track side-by-side with someone.

“Everyone else is experienced enough to be able to do it and obviously she’s not.”

De Silvestro didn't just claim she was ahead of Blanchard at the 150-metre board, but that there wasn't even contact.

"He was in front of me, but I think he was a bit too fast for the corner and he ended up in the wall. It wasn't really necessary, but it is what it is.