Australian motor racing legend Dick Johnson has announced a new era for his Queensland-based operation with the unveiling of a new manufacturer for the 2014 V8 Supercar Championship Series.

Johnson, and his racer son Steve, announced in Brisbane today they have been granted significant support from a new manufacturer to the sport starting next year.

The public unveiling of the Johnson’s new V8 Supercar program will not be until Bathurst in October. The team used today to make the announcement as it will give them a full six months to be ready for the momentous Mountain public event - a location that has been synonymous in making Dick Johnson a household name.

It is unbelievable that we’re able to make this announcement today.

“We need time to get everything in order and make the correct applications to homologate this new car under the V8 Supercar rules,” said Dick Johnson.

“Not to mention getting body panels together and our engineering team bringing the body into line with to the new generation V8 Supercars chassis. There’s plenty of work to be done.”

Queensland icon, Johnson, is determined that he can overcome some of the obstacles created by the new Car of the Future rules, including the requirements for four days’ testing and the engine modifications required.

“By making this announcement today, on the 1st of April, we’ll have six months before a private shakedown and then we can officially unveil it at Bathurst - which will be a proud moment for us all,” the five times Australian Touring Car Champion said.

“We know there’s plenty of work to be done, but to rush the project would be foolish.”

DJR will bring the fifth manufacturer to the V8 Supercar Championship - after Nissan and Mercedes-AMG (through Erebus Motorsport), debuted with Holden and Ford at the Clipsal 500 in Adelaide last month.

It is no secret that the Dick Johnson Racing operation has faced hard times over recent months and remains in the hunt for major sponsorship in 2013, but Johnson is confident that today’s announcement will stir refreshed interest in his operation.

“It is unbelievable that we’re able to make this announcement today,” said Steven Johnson - who is now in the role of General Manager at DJR. 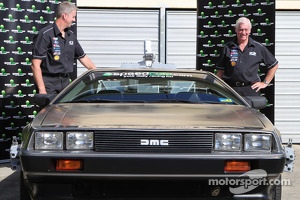 “We really want to stand out from the crowd come next year and in a way, go back to the future and advance to the top of the V8 Supercars grid again.

“This provides us with the best opportunity commercially and in competition moving forward.

“This year has been tough and we don’t want to get to April 1 next year and be behind the eight ball.”

Starting development now, Johnson hopes it will be a contender for a very special Bathurst 1000 in 2014.

“Looking forward to next year, we want to be strong out of the box, but our main focus will be on Bathurst,” the three-times Bathurst winner said.

“I can think of no more unbelievable way to celebrate that anniversary than with a Bathurst victory for our new manufacturer.”

DJR today begins the final stages of homologation before a public release at the Bathurst 1000. DJR’s fifth manufacturer will make its competition debut in the opening round of the 2014 V8 Supercars Championship at the Clipsal 500 in Adelaide next March.

Johnson to race Mustang at Bathurst