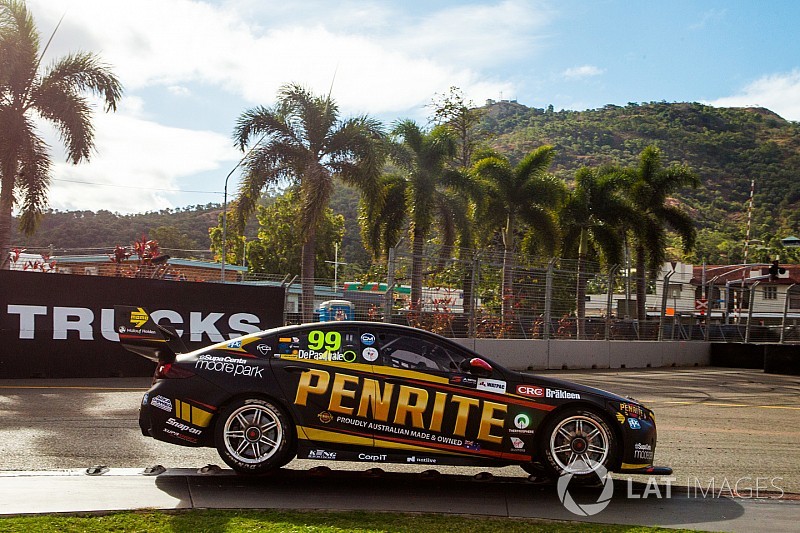 Michael Caruso and Anton De Pasquale are both adamant they aren't to blame for the nasty shunt that took Caruso out of today's Townsville 400.

The pair clashed late in today's second 200-kilometre race in Townsville while scrapping over 19th spot, Caruso looking to defend while De Pasquale was on the attack.

They wound up on the same bit of road heading into Turn 11, De Pasquale's Erebus Holden launching Caruso's Nissan spectacularly into an infield tyre barrier.

The shunt left Caruso unimpressed with both De Pasquale's driving and the fact that the rookie didn't bother to check on him after the race.

"I came across the cover and Anton has gone straight into the back of us, which has careered my car into the tyre wall pretty hard," he said.

"It’s a disappointing way to end the weekend. The whole weekend was tough as it is, but for someone else’s action to result in that much damage doesn’t make everybody happy.

"You’re allowed to cover your line and he hit the back of the car pretty hard which has sent it right.

"The disappointing thing is after an impact like that, he would have seen the footage by now, and he isn’t even man enough to come and see if I’m alright.

"That’s probably the most disappointing. He probably thinks he’s in the right, whether that’s accurate or not is his opinion, but it’s a judge of character, I guess."

It was Caruso's second hit of the race, having been spun by teammate Simona de Silvestro on the first lap.

"We got turned around at the start by Simona, which was always going to make the race hard, but we did our best to fight back," he added.

"It was a pretty big hit as well, but she apologised afterwards."

De Pasquale, meanwhile, was left convinced that the crash was actually Caruso's fault.

"I was catching Michael. He had a bit of slide, I went to go to the inside to make a pretty easy pass," he said.

"He sort of turned down to block, and at the same he did that I went and then he braked. I was pretty close to him, so there was no time to avoid him and unfortunately there's two damaged cars.

"I haven't really watched it in that much detail, but I feel like I didn't have anywhere to go. And there wasn't much to fight for at that point in the race.

"I didn't expect such a big defensive move, and at the same time I didn't brake any deeper. I braked where I did the previous lap when I was catching him. He was just there when I went to do it.

"We were racing for 19th at that point, so you don't want to damage your car racing down there."

De Pasquale said he didn't feel any great need to speak with Caruso about the incident.

"There's not much to talk about. It looks worse than it was. He was defending and I didn't expect it."