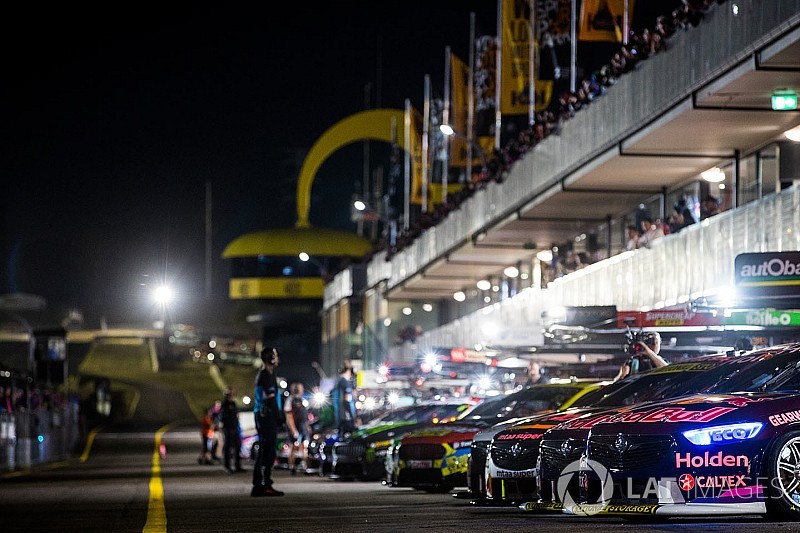 Light conditions for this evening's night time Supercars race in Sydney will make overtaking riskier than usual, drivers have warned.

The 3.9-kilometre circuit will be lit by 50 temporary lighting towers, with Supercars opting for pockets of darkness to create drama rather than comprehensive daylight-like conditions.

While spectacular for the TV cameras with glowing brake discs and exhaust flames, some drivers have warned that the lighting system may create carnage during tonight's 300-kilometre race.

The biggest concern seems to be at Turn 2, with the bank of lights illuminating Turn 1 turning into a mirror-blinder as the cars turn left and head towards the upcoming hairpin.

"The hardest thing is when you look in your mirrors it looks like you've got 30 racecars behind you," said Scott Pye.

"You come out of Turn 1 and the lights on the front straight are in your mirrors, and it looks like you've got a band of cars there.

"I got stuck behind one car [in practice] and honestly don’t think he knew I was actually behind him, because of the lights.

"That may see some incidents at the start of the race, hopefully not, but it may be different as well. It may be when you do have cars behind you they block it out a bit more."

Mark Winterbottom agreed that Turn 2 will be action-packed, particularly on Lap 1.

"The toughest part about the start is going to be the 26 lights going into Turn 2 and people changing quickly and brake lines and all that sort of stuff," said the 2015 series champ.

"The depth of the car feels a lot different in the dark to what it does in the day time. Reflections and lights and all that sort of stuff does throw off your perception a bit.

"That’s probably the biggest thing. If I was a spectator I’d be down at Turn 2 in the car, unpack my dinner, sit down there and have a watch of what happens."

While acknowledging how much tougher it will be execute a clean pass, Pye added that he's not expecting any lenience from the stewards.

"I think we’ll have to be on our toes. I don’t think [the stewards will] cut too much slack," he said.

"The issue is going to be when you put it down the inside. I think there’s going to be more onus on the driver doing the overtaking, because you’re going to have to make sure you know there’s sufficient overlap not to turn a car. There might be a bit more hesitation.

"But it’s like any pass, you’ve just got to commit and stick it down the inside. You’re counting on the driver in front seeing you, that’s all."

The Supercars field will practice and qualify in day time conditions today, before a 300-kilometre race under lights tonight.